Pizza is a very versatile type of food and the cookware used for making one can also be versatile. So here, we will show you how to cook tortilla pizza on a Blackstone griddle.

Making pizza at home is a very fun and healthy way of eating one of the foods that are highly regarded as unhealthy. So we suggest that you always make one with your own ingredients.

This will give you more versatility and options on what you can put on the pizza. It is also better than ordering from restaurants as you can control the number of ingredients that you want.

That is why it is healthy to make pizzas at home. Tortilla pizza might not be the most popular kind of pizza but it is one of the healthier options that brings a unique flavor to the pizza.

The downside of making pizza at home is that it takes up a lot of time. So you can alter your recipes and buy ready-made doughs or tortillas in this recipe. 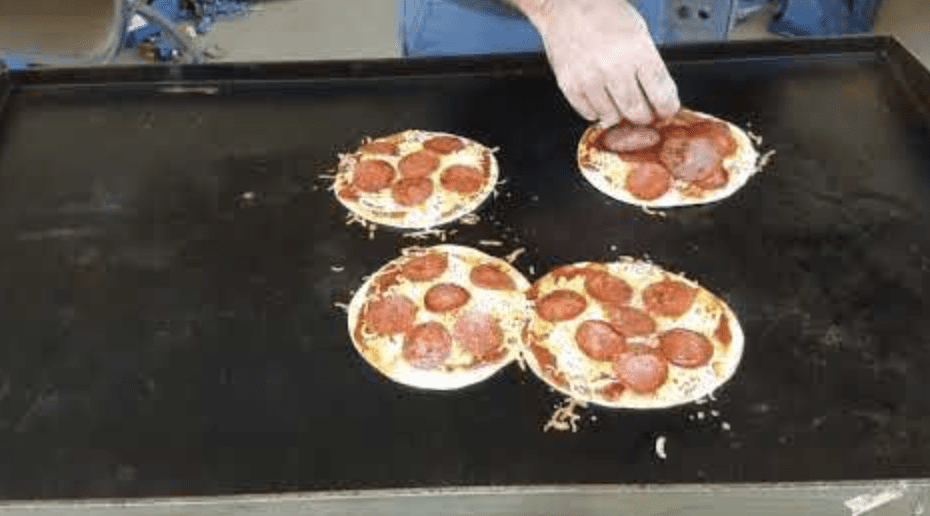 When you cook pizza, you should not think of the cookware to use. You are not limited to just using ovens as you can make pizzas in almost any kind of cooking appliance that you have.

Blackstone griddles are also not the most common piece of cooking equipment to make pizzas in. However, it does produce the cooking space and temperature for a perfect pizza.

So if you own one, you no longer need to purchase an oven to make a pizza. Just follow the instructions below and you will be having the best tortilla pizza on a Blackstone griddle.

There are also a few tips that you can use in making the pizza so read until the end of the post. You will see the best results after following the instructions below.

But first, What Is A Blackstone Griddle?

Blackstone griddles are cooking appliances that are commonly confused with flat-top grills. However, they have major differences that make the griddle better for cooking pizzas.

One thing is the cooking surface itself. Griddles are made with heavy-duty stainless steel instead of other metals that are lighter and more conductive used in flat-top grills.

This material is the key to making pizzas in them with almost the same result as with ovens. The metal conducts heat slowly and brings it back out to produce heat through convection.

The burners of a griddle are also different from that of a flat-top grill. Flat-top grills have round burners underneath them which makes the heating up process a bit uneven.

For griddles, they have rectangular burners that run across the entire cooking surface. This gives the griddles more even heat so there is no need to move food around.

This is extremely important especially for this recipe since the dough that you are going to use will be thinner than most pizzas. It also cooks faster so griddles are perfect for this.

You do not need to preheat other cookware such as baking stones along with the griddle. The cooking surface is good enough to produce a crispy crust and nice chars on the bottom. 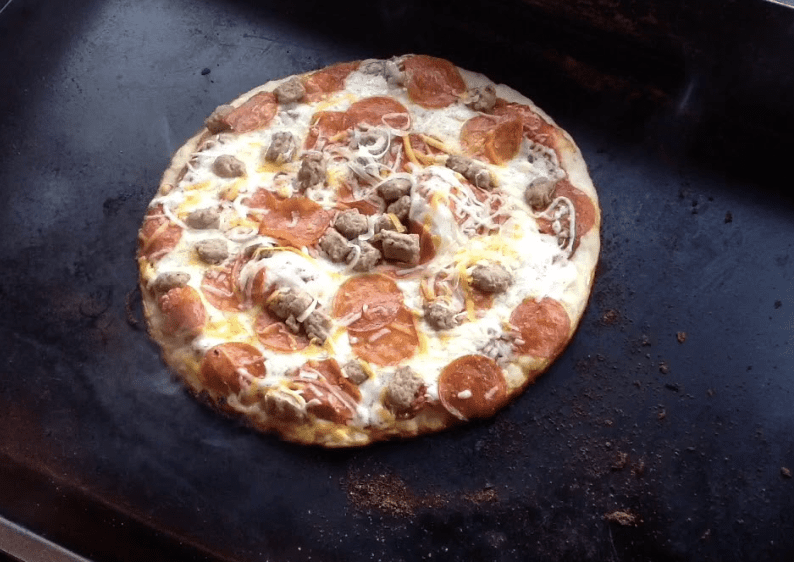 Can You Bake On A Griddle?

Absolutely! This is our basis for deciding whether or not you can cook pizza on a griddle. The Blackstone griddle is able to produce enough heat to make the dough rise.

Muffins are one of the many baked goods that the Blackstone griddle can cook. So with that, it means that it can also make pizzas great when you use the right tools and technique.

With that being said, there are some things that you need to do so you can create an oven-like environment. The Blackstone griddle is not enough so stick around to know more.

Now that we have confirmed that you can bake on a Blackstone griddle, let us start with the preparation of the pizza and how you should coon it on the griddle.

Get all the ingredients ready and start by making the tortilla. If you do not have the time, then you can order fresh or frozen tortillas from the nearest store.

A tortilla is a thin Mexican type of bread that is usually made from corn. This brings a slightly sweet flavor to the pizza so find the ingredients that match that sweetness.

Not to worry as the tortilla dough will not taste too sweet so you can still use the basic pizza ingredients and toppings that you want. Just get them ready beforehand.

If you choose to use meat as toppings on your tortilla pizza, then you should cook them first. This way, the meat will finish cooking along with the tortilla and the other toppings.

The meat should also be ground so it cooks faster. If not, you can slice them thinly and place it on the pizza in an even manner, the same goes with the vegetable toppings.

The tortilla will cook pretty fast so you need to compensate for that by slicing the toppings thinly as well. Once you do that, all the ingredients will finish cooking at the same time.

Heat Up The Griddle

Consistent heat is important in making pizzas, that way, you will have a more accurate timing on the recipe.

Thankfully, Blackstone griddles are powered by propane gas which gives that consistency.

Once the Blackstone griddle reaches the desired temperature, place the tortilla on the cooking surface. You no longer need to preheat other cookware.

This is a technique that will remove a lot of mess compared to when you prepare the pizza on a separate table so we advise you to assemble the pizza directly on the griddle.

Put the pizza sauce right away as the tortilla starts cooking. The sauce will slow down the cooking process as you put the other ingredients on top of the pizza sauce.

Place the ingredients evenly on top of the sauce and then protect those ingredients from burning by covering them with shredded mozzarella cheese.

Now, the secret to cooking the pizza is the heat from the griddle. But, you will need heat that is coming from above the pizza in order to cook the toppings.

In order to do this, you will need a pizza dome. This is a stainless steel dome like the ones that are used in high-end restaurants to cover the food that is delivered to your table.

If you have one, use it to cover the pizza completely. The dome will enclose the heat that is coming from the griddle burners and create an oven-like environment.

If you do not have a pizza dome, you can use a foil tray to cover the pizza or anything that is made of metal that can enclose the pizza to conduct heat from above.

One benefit of cooking the tortilla pizza on the Blackstone griddle is you no longer need to flip the pizza. Just check the crust regularly for the charring that you want.

Cooking the tortilla pizza at this temperature will usually take around 5 minutes. So take a look if the tortilla is crispy and the cheese has melted before removing it from the griddle.

Get the tortilla pizza out of the griddle and then place it on a plate or on the pizza peel. Let it rest for about 5 minutes so the crust can cool down and become more crispy.

Do not let it rest for longer than 5 minutes or the excess juices will seep into the tortilla and make it soggy. Cut the pizza and then enjoy it!

Now that you know all the secrets in cooking tortilla pizza on a Blackstone griddle, you can make your own at home and add all the ingredients that you want.

Just a few tips, I found it easier to use a grill spatula instead of the thick pizza peel when cooking on a griddle. You can also put oil on the griddle before cooking to prevent the tortilla from sticking.

Tortilla pizza is a very thin pizza so you need to keep the toppings thin as well. This way, you will not be burning the tortilla crust and leaving the toppings undercooked.

This is a very easy and very versatile recipe so go and make yours at home. Put all the ingredients that you want and be as creative as you can be!