If you ask a lot of people about what their favorite food is, it is likely that some or most of them are going to say something unhealthy yet delicious like pizza.

But that is an outdated assumption as pizza is a very healthy kind of food if regulated. You can put all the healthy ingredients in a pizza, just take this BBQ Chicken Pizza for example.

This kind of pizza is a great source of carbohydrates as a source of energy and proteins for building up muscles and other damaged tissues.

If you want to go even healthier, then you can put vegetables in your pizza and add a little bit of flavor by mixing it with a nice sauce, garnish, and toppings that will burst a lot of flavors.

That is the beauty of pizza. It started out from a simple, food-for-peasants kind of food to be one of the best and most sought-after comfort foods in the whole wide world. 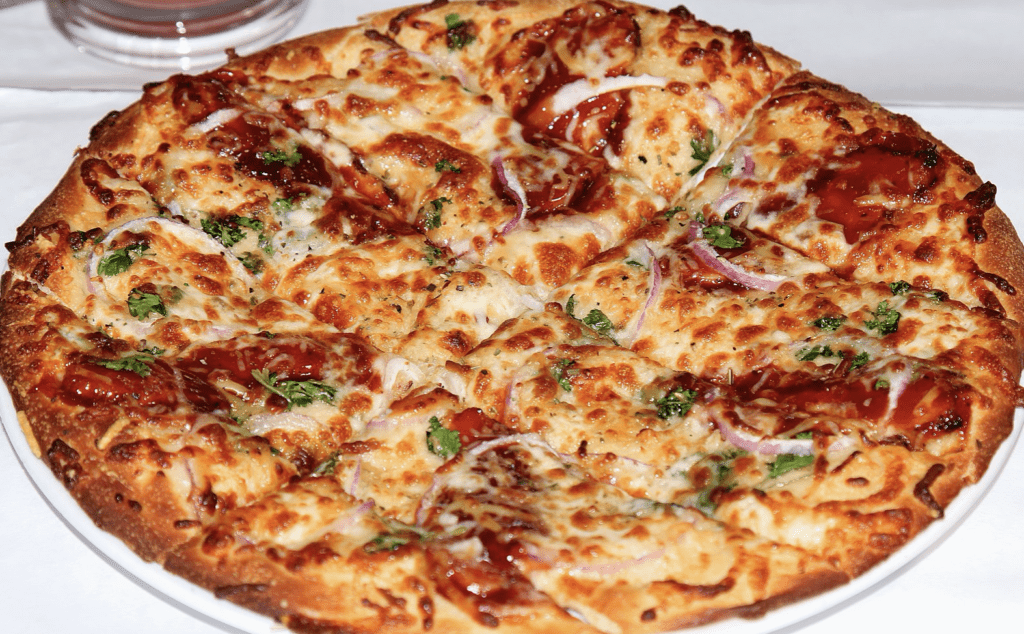 One benefit of a pizza recipe is that it can give you an idea of what to cook next since it is very versatile. We see Hawaiians with their pineapples on their pizza and the large deep dish from Chicago.

There are also so many variations of pizza. So if you were to make your own pizza, you can be as versatile as possible and make it according to your taste.

It is a personal journey that even when other people do not end up liking your recipe, at least you do love it and that you can make more recipes that are as unique as the last one.

BBQ Chicken Pizza might not be as unique as most pizza but it is one of the weirder combinations that we all thought will not work, but then, here we are.

So if you want to make your own BBQ Chicken Pizza for dinner, then we have the perfect recipe for you to guide you in the right direction so let’s get going.

– Half pound of chicken (skinless and boneless)

– 1 ball of dough (homemade or store-bought will do) 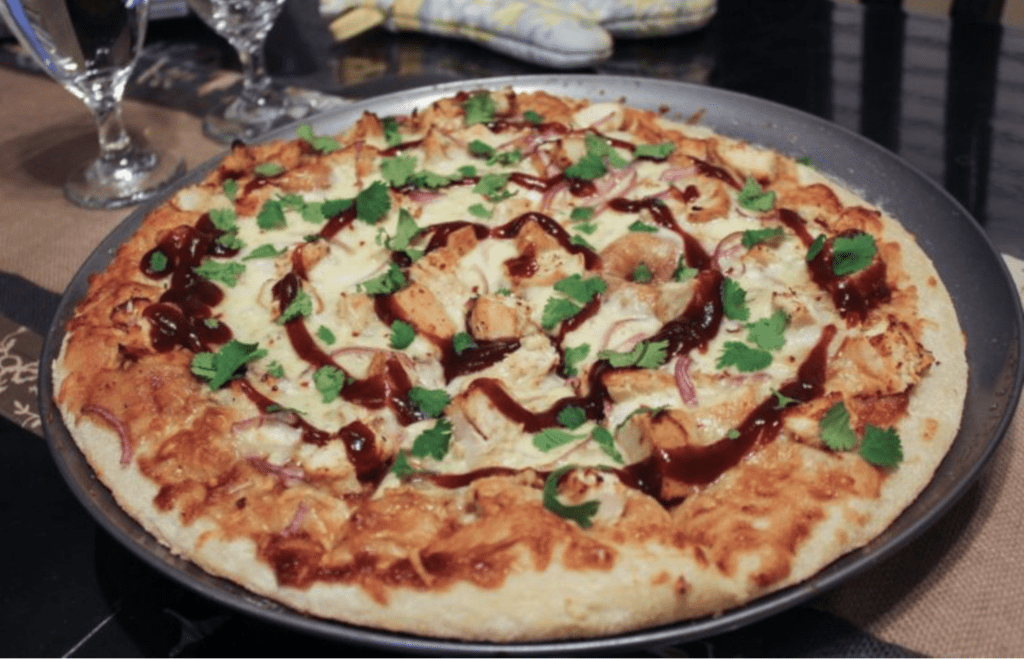 This is an important habit that you should start practicing. If you are using a regular home oven, then you should always do the preheating of the oven before the other steps.

This way, you can create as much oven spring as possible so when the pizza is slid inside the oven, it will rise and cook faster.

So preheat the oven to 475 degrees Fahrenheit. This is the optimal temperature for pizza with thick toppings such as meat that just take longer to cook.

If you use either homemade or store-bought dough, you should let it rest especially when it has been stored in a refrigerator or a freezer so it can be stretched easier.

Once it has thawed, stretch the dough to a 12-inch circle and make sure that the dough is as even as can be and that there are no holes in it.

Cover it with plastic wrap and let it rest for a while. This process will reactivate the remaining yeast on the dough and make it rise for a little bit.

While preheating the oven and letting the dough rest, start cooking the chicken. This is necessary because if it is not cooked before putting it in the oven, it will come out raw.

So bring out a cast-iron skillet and drizzle a little bit of olive oil and let it heat up. You can dice or chop the chicken and then cook them on the skillet for about 5 minutes.

Do not stir it too often. 5 minutes will not be enough to cook the chicken through but do not worry because it will continue to cook in the oven.

Remove the chicken from the skillet and place them on a plate covered with paper towels to drip the oil and moisture from the chicken.

In order to prevent the wet toppings from making the pizza crust soggy, lightly brush some olive oil on the dough before putting the toppings.

Place the oiled pizza dough on a pizza pan and then start with the sauce. Spread the BBQ sauce on the pizza dough and leave an inch of the border on the dough and save about a spoonful of sauce.

From there, you can now add the cooked chicken by spreading them evenly on the sauce. Do the same with the cheese and red onions.

After that, get the rest of the BBQ sauce and then drizzle it over the toppings.

Let the pizza bake for 12 to 15 minutes or until the crust has turned golden brown and the cheese has melted over the chicken and onions.

Let it rest for a bit or you can go ahead and slice it and serve while it is still hot.

1. Always use instant yeast in the homemade dough so that the rising time will be reduced so you can cook right away.

2. You can add garnishes to the pizza such as cilantro, or fresh basil and parsley leaves. If you want, you can even sprinkle some salt and pepper on the pizza.

As much as possible, we recommend that you use homemade dough and sauce so that you have more control over the flavors of your pizza.

Not saying that store-bought dough is worse but homemade dough gives you that freshness and flavor. It will also make you better in the long run so you will know which dough is good or bad.

Granted, you have the time. Making the dough is a long process so if you do not have time, then you can go for the store-bought pizza dough.

Use a Pizza Stone

Pizza stones are amazing stoneware that can make pizzas or any baked goods better. They are porous in nature so they absorb all the unnecessary moisture from the pizza.

When a pizza stone does this, the crust of your pizza will have a fluffy, chewy texture on the inside and a crispy crust on the outside.

When preheated with the oven, pizza stones are also better in cooking the pizza all around. The heat will come from the top from the oven and the retained heat from the pizza stone will cook the pizza from the bottom.

Making a pizza is all about creating the best version that you can. So you can add any ingredients that are available around you and experiment with what you have.

This way, you might only be a pizza away from creating a new flavor. So be as creative as you want and add anything to the pizza, even on this recipe.

Chicken is such a great source of protein so if you want to be healthier while still eating meat, then this recipe is the perfect one for you.

You get the classic taste of a backyard barbecue from the BBQ sauce, plus the feeling of a comfortable rainy Sunday from the hot pizza and melting cheese.

So go ahead and follow the recipe, take some of the tips and notes, and as always, be creative and add anything that you think will make this BBQ Chicken Pizza recipe better!