With so many types to choose from, pizza is one of the best snacks or even meals you can get or cook quickly. So here is a guide to help you choose between pan pizza vs. cheese burst.

Pizza chains such as Domino’s and Pizza Hut are famous for their different types of pizzas. You can also make it yourself, but they offer quick service so you can get your favorite type of pizza.

Pan pizza is a very popular choice for people who love to eat pizza as a meal. It is a variation of the deep-dish pizza from Chicago, so it features a thick crust loaded with lots of toppings. 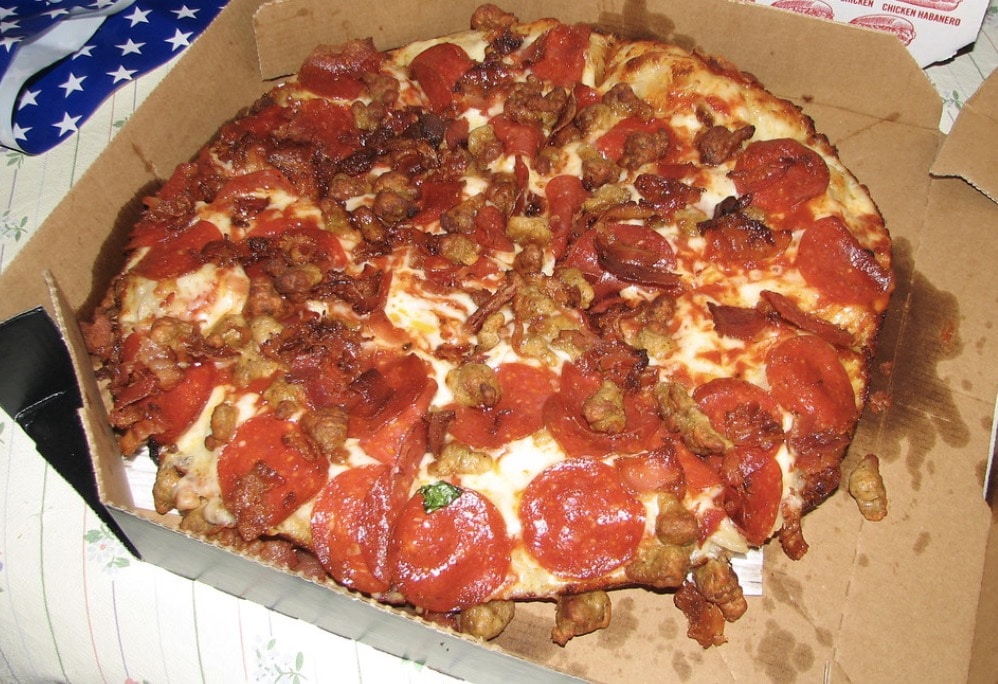 There is also a different technique in making pan pizza to keep it crispy even with the slightly thicker crust. We will get into the details of that part of the pizza later on in this post.

Cheese burst is not the most popular type of pizza, but it is one of the best. It is the perfect pie for people who love cheesy snacks or meals as it contains a lot of cheese when processed.

It also has a thick crust because of the layers, but there are some significant differences between the cheese burst and pan pizza. Here, we will try to figure out those differences.

What Is Pan Pizza?

Pan pizza is a type of pizza cooked in a slightly shallower pan than the ones used in making deep-dish pizzas. It is very similar when it comes to the technique and process.

You use some oil underneath the crust to prevent it from sticking to the pan and to create a nice golden brown finish on the crust. It is still crispy with a little bit of doughy or chewy texture.

The pan pizza is the thickest crust you can choose for most pizza chains unless selling deep-dish pizza. It has a lot of toppings and other wet ingredients, such as the sauce.

Compared to the normal or usual thin crust pizza that we eat, it has a more buttery taste on the crust.

Since the bottom part of the pizza crust gives a fried taste because of the oil underneath, it is still crispy on the outside. It then handles the other parts of the pizza to prevent it from falling apart.

In most pizza chains, the toppings that you get can change to your liking. So you choose the pan pizza crust and load it with your favorite toppings to get a familiar taste to it.

What Is Cheese Burst Pizza?

Cheese burst pizza is a newer type of pizza that you will surely enjoy. You get them at pizza chains such as Domino’s, but you can also make one yourself at home if you want one.

It has a thick crust filled with a load of molten cheese. Unlike the ones sold in Pizza Hut, it has cheese on edge and rolled over to create a cheesy crust.

Instead, the crust has melted cheese inside, for this to happen,  there is a slight change in the crust making process that makes cheese burst pizza, but it is worth the work. 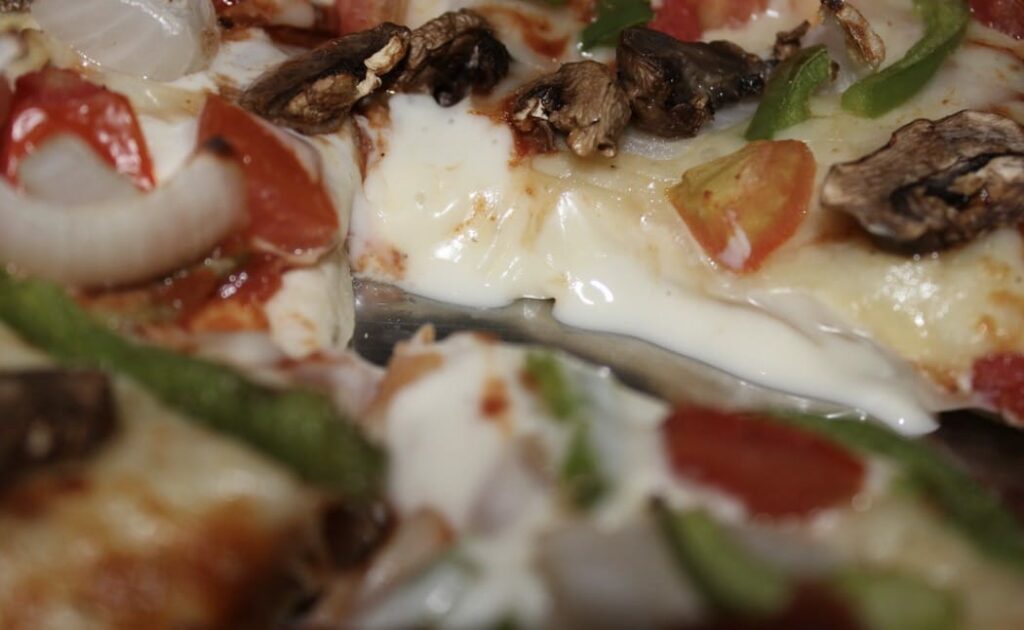 The name is truly appropriate for this type of cheese as it has another layer of cheese. The toppings, cheese, and sauce go on the same as how you usually find on pizzas.

Aside from the crust and the process that it goes through, cheese burst pizza is just like any normal pizza. It is the perfect meal for people who love to put cheese in their foods.

The flavor is perfect for making a pizza filled with molten cheese.

When making these types of pizza, some things are pretty similar and standard. There is a general rule in making pizzas to make the crust perfectly crispy and rigid.

The difference is the taste incorporated with the crust. It allows you to combine other flavors from the toppings to make a great pizza and enjoy the energy bite that you have from it.

Here, we will look at each important part of the pizzas that we are comparing and see where they differ from each other to make a better decision on which pizza you like.

The ingredients used in making the dough of each pizza are pretty similar to each other. The usual flour, yeast, water, olive oil, and salt combination creates the pizza’s dough.

The only difference between the two is that the cheese burst pizza usually incorporates sugar into the mix. It is to make the dough sweeter to counter the saltiness you get from the cheese.

The sugar helps break down the other chemicals inside the dough to make a buttery mixture between the sweetness and creamy saltiness from the cheese. It is the perfect balance of flavor.

The processes involved in the dough used in these two types of pizzas is almost the same. The difference is that the cheese burst pizza dough is left to rise for a longer time.

The reason behind this is to make the dough stretch thinner. The pan pizza dough does not rise too much as you shape it by pushing it to the edge of the pan used in cooking it.

The cheese burst pizza dough has two dough balls, with one slightly smaller than the other. This is to create the layers later on when the crust has cheese.

The pan pizza dough is on a pan that has a thin layer of oil in it. This is to prevent the pizza dough from sticking to the pan while you arrange the other ingredients on top of it.

What makes the cheese burst dough truly different from the pan pizza dough is it is pre-cooked.

The pan pizza has a perfectly rounded shape for its crust. It usually comes out buttery with a golden brown finish and a crispy texture and rigid form on the outside to hold the toppings.

The taste of the crust is usually buttery from the layers of cheese on top of the crust. It helps the pizza gain a smoother texture when combined with the toppings such as sausage and chicken.

The insides of the crust are airy and fluffy when you take a bite. It does not necessarily snap when you bite into it, but the crust’s texture gives you a crispy bite.

The cheese burst pizza has a different technique, and the crust is very different. There are two layers of dough used in this pizza, and between them is the layer of cheese.

So you first stretch the dough to make the first layer and then place the cheese on it. It is then slightly cooked, making sure that the dough and the cheese cook well.

The other thin layer of dough is pre-cooked, and you carefully place it on top of the cheese. This layering of dough-cheese-dough is the main base of the pizza cooks quickly.

The crust of the cheese burst pizza is truly an amazing innovation to pizza. It gives you a slightly crunchy outside, and the insides just melt in your mouth along with the cheese in between them.

The toppings of these pizzas are pretty much the same, and depending on the pizza chain that you get them from; you can change the toppings that you want to go with each type of crust.

The cheese burst pizza has its toppings usually layered just like the usual pizza. That also means that you get another layer on the outside after putting the molten cheese inside the dough.

The pan pizza has different types of toppings that go very well with the crust. So if you make one at home, make sure you get the best and freshest toppings that you can find on the market.

The pan pizza is a perfect sit-down meal if you are looking for pizza to get you full. It has a thick crust with many toppings, sauce, and cheese to make you satisfied.

The cheese burst pizza has a lot more than just the toppings. It has molten cheese inside, so you can have a meal with the best and tastiest crust while eating this pizza.

Some people might not like the cheese burst pizza for its overpowering cheese flavor or for people who are lactose intolerant. So it is all about personal preference when it comes to choosing from the two.