Pizza is one of the most versatile types of food. You can add any flavor that you want and you can make it as healthy as you can or adjust it to any diet that you are currently doing.

A classic pizza contains the simplest ingredients. But if you are avoiding other foods such as meat but still want dairy, then our Mushroom Spinach White Pizza is the perfect one for you.

You see, the simplest form of pizza out there contains only three main ingredients. The pizza dough, the tomato sauce, and the cheese for a tastier flavor.

That was considered as the original recipe for pizzas. However, since the food has been incorporated into almost any culture of any country, there are additions to those ingredients.

For example, the New Yorkers have put a lot of other ingredients in the pizza, it may range from chicken, beef, pork, and vegetables that are abundant during a certain period of time.

See, pizza can be seasonal so if one ingredient is a little harder to get, you can go for something else that is more abundant in your area and incorporate it into the pizza recipe. 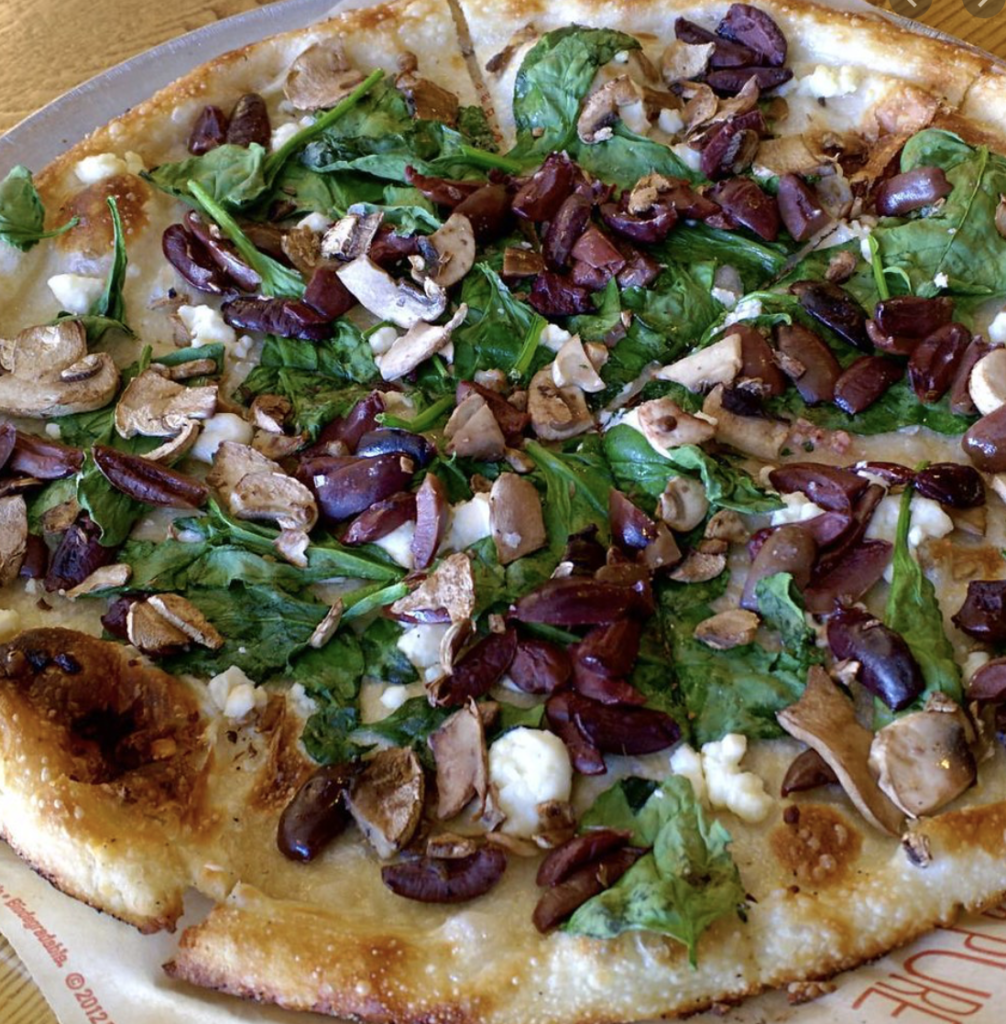 For those controlling their intake, there are also some pizza recipes that will help. This Mushroom Spinach White Pizza is one example of those pizza recipes for people trying to lose weight.

So if you are looking for a pizza recipe that you can eat without the guilt of gaining weight, then you can do this recipe. It is also perfect as a game day food for when you are watching your favorite sport.

This is a pretty simple recipe so if you only have a small amount of time available, then you can go for this recipe to have a quick munch of pizza before relaxing.

– One and a half pounds of pizza dough

– Half teaspoon of Italian seasoning

– Half teaspoon of salt

– Half teaspoon of ground pepper

– Half teaspoon of dried basil leaves

– Half teaspoon of garlic powder

Before getting into the other ingredients, make sure that you preheat the oven so that while you are waiting for it to reach the desired temperature, you will not waste time by doing the other steps.

If you are using a pizza oven that can reach more than 900 degrees Fahrenheit, then you can preheat it for ten minutes and the pizza will cook in just a minute or even less.

However, if you only have your regular home oven, you will need to preheat the oven at 450 degrees Fahrenheit for at least 30 minutes and the pizza will take longer to cook.

While waiting for the oven to reach the desired temperature, prepare the other ingredients. Slice the mushrooms in half and heat up a skillet on the stove.

Place the sliced mushrooms in the skillet and let them cook for a couple of minutes. Stir it constantly so that the mushrooms will not get burned.

Stir frequently until the butter is melted and the mushrooms are coated with it. Remove them from the skillet and then let it rest on the side.

On the same skillet, put the olive oil in and let it heat up for a bit. Slice the spinach leaves into small pieces or if you did get baby spinach leaves, then there is no need to slice them.

Put them in the skillet and let them cook for a bit. Sprinkle some garlic powder over the spinach and then add salt and pepper to taste.

Let the spinach cook until they are wilted. This will take around 3 to 5 minutes of frequent stirring so that the spinach at the bottom will not be burned.

You just need to act fast here so that the spinach leaves and the mushrooms do not get overcooked while resting.

If you are serving only one pizza, then the big dough will be more than enough, so cut it into two halves and you can use just one of those.

Flour your working space and start stretching the dough flat into about 12 inches of crust. Make sure that there are no holes in it and that the dough is evenly stretched.

Spread the ricotta mixture over the stretched dough. You do not have to go thick on the mixture as it will potentially destroy the dough so go thinly and leave at least half of an inch of dough on the sides with no sauce.

Place the cooked spinach and mushrooms on top of the ricotta mixture. Make sure that there are no dense areas on the pizza to keep it firm later when it is cooking.

Put 1/3 of a cup of mozzarella cheese on top and put some ground pepper over it. You can also add some salt if you want to make the pizza tastier.

Place the pizza in the oven and let it cook for 10 to 15 minutes. This is for regular home ovens, if you are using a pizza oven then the pizza will be done after just 1 minute.

Take it out of the oven once the cheese is melted and the crust is browned. Let it rest until warm, cut it, and then serve.

If you want to make a better pizza, then we have some tips that you can use. So along with the easy recipe, you can master the cooking process with these recommendations.

Use a Pizza Stone

While this is not totally required, the pizza will come out best if you use a pizza stone. We tried the same recipe on a cast-iron skillet, pizza pan, and on a pizza stone.

The results are pretty similar when it comes to the pizza pan and the cast-iron skillet but the pizza that was cooked on the pizza stone came out best.

The porous nature of the pizza stone allows it to absorb as much moisture from the dough. So if you are like us and you want a crispy crust, then we suggest that you use a pizza stone.

There are a lot of ingredients that you can add to this recipe or any pizza recipe, for that matter. If you want a spicier version, you can sprinkle some red pepper flakes before cutting it.

You can also try other kinds of cheese on the pizza. The recipe is pretty easy and it is flexible so whatever is available to you, you can be creative and add it to the recipe. 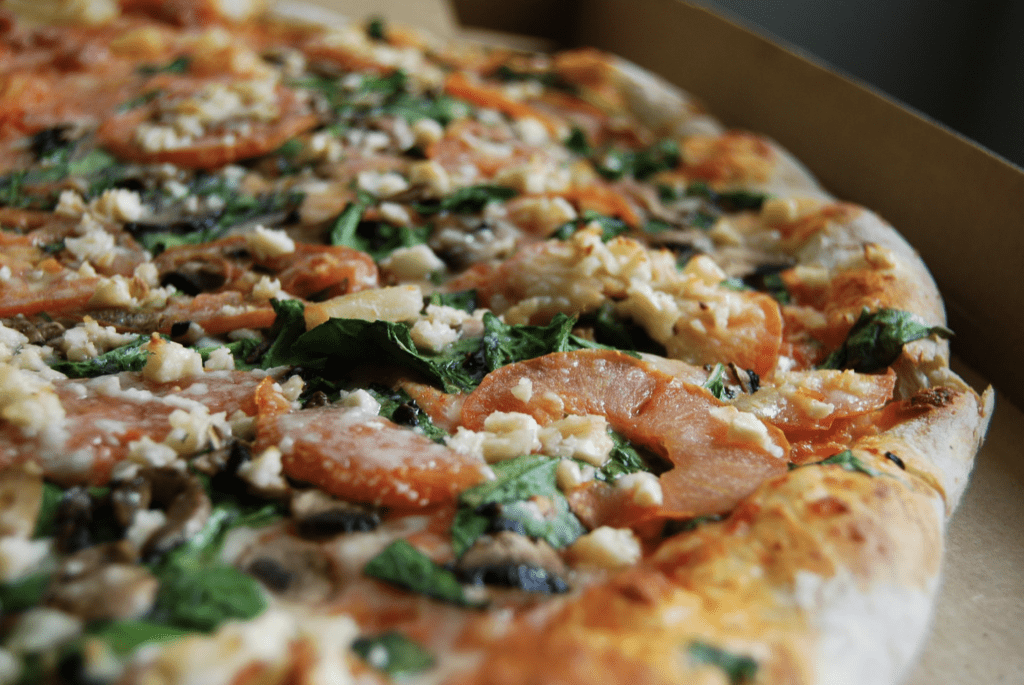 For the dough and the sauce, we suggest that you make it at home. By doing this, you have more control over the flavor and ingredients that you use.

There is nothing wrong with using store-bought ingredients but we still think that it is best if you make your sauce and dough in your own home to make it as authentic as possible.

If you want to make your game day or even just a regular dinner more fun, then this recipe will bring a whole lot of fun and flavors to the table.

Pizza really is the perfect food when you want to relax. So turn on the TV, select the channel and sit back while you have a slice on one hand and a drink on the other.

This pizza recipe is also one that brings less guilt. There is no meat in this recipe so it contains less fat and more vitamins and minerals from the mushroom and the spinach.

So get healthy while enjoying the best food that is considered often as a cheat food. Follow the recipe and the tips and start making the best mushroom spinach white pizza!