Even if you keep ordering from the same pizza chain, it is still hard to choose the right pizza since there are many options. Just like the different types of crusts in Domino’s that you can get.

There is always a type of pizza that fits any occasion that you are having. You may want to have some snacks while you are on the move or just a simple meal while watching your favorite film.

While that is beneficial, it can also sometimes be a downside. You get to have many different options, but you also get confused about which type of crust or pizza fits the occasion you have.

Domino’s is a pretty popular pizza chain that is known all over the world. Like most pizza chains, they also offer many options to choose from, and it can also be a bit difficult for you.

So here, we have the perfect guide for you to make the right decision on which pizza to choose. We will look at the different options for the pizza crust available in Domino’s.

Read on as we see each type of pizza crust and look deeper into how you make them and how they taste to see which pizza will be perfect for your meal or a simple and quick snack.

This is not necessarily a deep-dish pizza, but Domino’s named it that way. It is similar to the deep-dish pizza that is very popular in Chicago, but it does not have a crust as tall as that.

This pizza crust is also cooked in a pan, which raises its crust. However, the dough is laid on the pan’s bottom and folded on the edges, so it does not cover its sides.

The crust is usually thicker than the common pizzas that we have from pizza chains. It has a lot of sauce, so it needs to be crispy on the outside, so it does not sog when lifted.

That is why the crust cooks with a thin layer of brushed oil underneath. This process fries the crust’s outer parts and creates a rigid and crispy crust for the heavy and wet toppings.

Despite having a crispy crust, the insides are still fluffy with just enough air inside. That means that it is crispy on the outside, but generally, Domino’s pan crust is a little bit chewy.

Since the crust is thick and filled with many toppings, it is the perfect pizza for a sit-down meal. A couple of slices with this pizza can fill your stomach with a lot of delicious flavors.

If you want a thinner option for our pizza crust, you can order the Classic Crust from Domino’s. It is one of the best crusts that the pizza chain sells and is great as a meal.

It is made with the same dough ingredients and cooked almost the same way. It is the middle ground between the deep pan crust and the thin and crispy crust from the pizza chain.

The crust’s outsides are crispy and can handle slightly larger toppings such as sausages and thick slices of vegetables. The insides are more compact, however, so it is quite chewy.

Yes, the crust’s insides can still be airy but not as much as the other options. It has a dense interior which gives its rigidity and chewy texture that goes well with the toppings.

It is topped with just enough sauce and cheese while the toppings bloom with flavors. It is usually made with sausages, pepperonis, and even pineapples if you love them in your pizzas.

If you want a great pizza that is great for just starting your stomach or planning to eat some other main course, then a slice of the classic crust is the perfect choice for that. 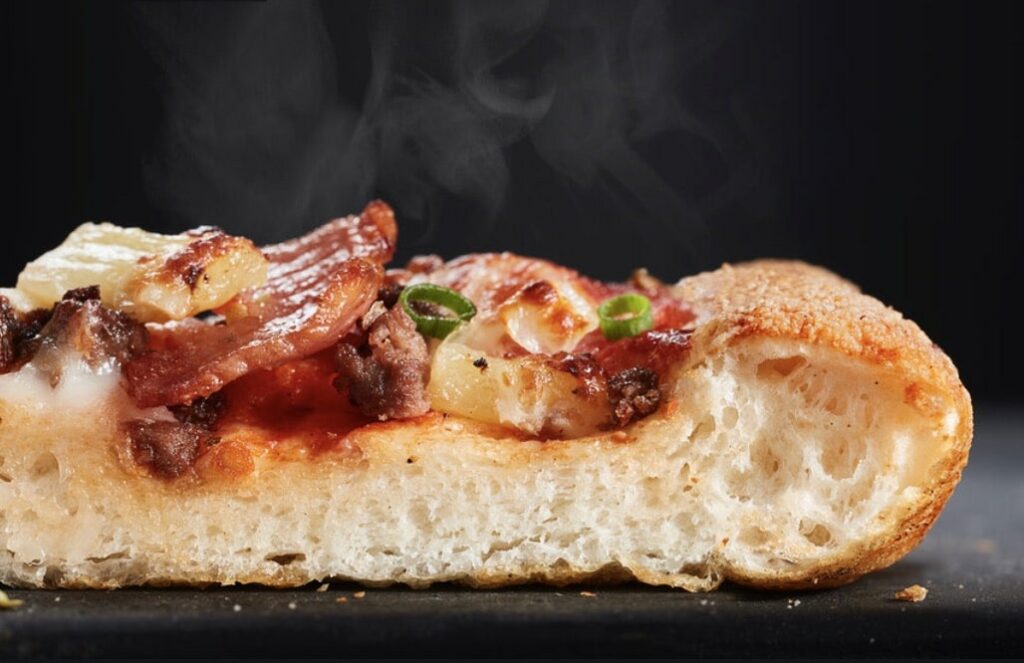 You might not find this option on Domino’s official website, but most of their branches have this option. It is also an option that goes between the deep pan and thin crust.

It is thinner than the classic crust, so it can also be a snack or an appetizer. It is handmade, so it has some of the authentic techniques incorporated with making it.

The dough’s shape gives it its unique flattened edges. You then toss it in the air, and the spinning motion allows the edges of the dough to expand further, therefore, stretching and shaping it.

That is also why the hand-tossed crust from Domino’s and most pizza chains do not have a perfectly round shape. They can then shaped into a rounded shape with a sheet pan.

It has a crispy outside that snaps off when you bite or separate a slice from the whole pizza. It goes very well with thin toppings, and the flavor combines well with the sauce.

The crust always has a golden brown finish, and it is great for a slightly heavy snack. It does not necessarily make you full with just two slices, but it gets you to keep wanting more of it.

One of the most common types of crusts in pizza chains is their thin and crispy crust. This is also available in Domino’s, and it did not take long after its release to be popular with customers. 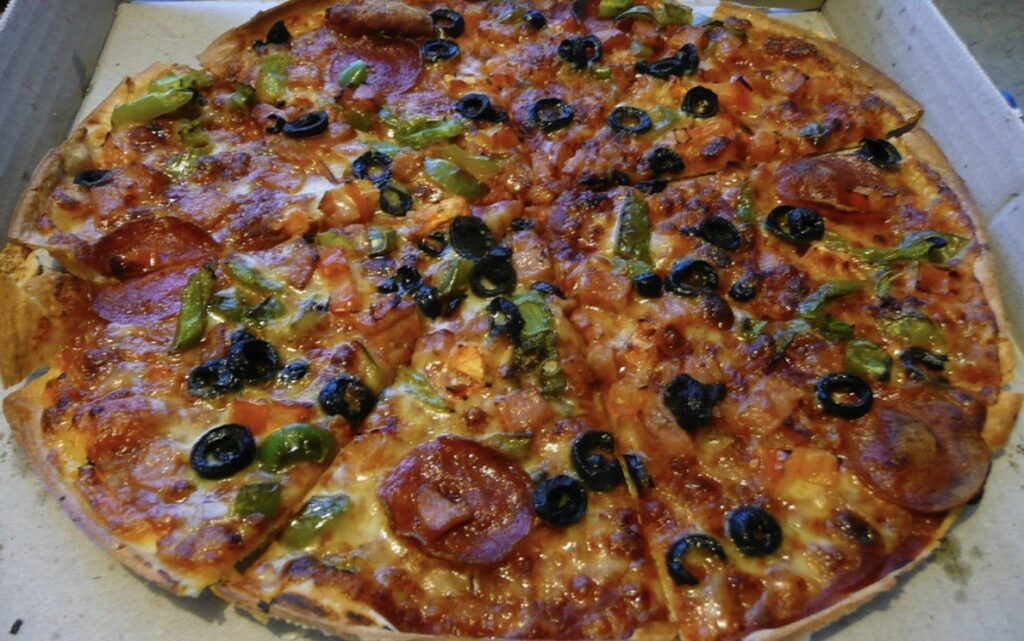 It is usually the first choice when people order from Domino’s as it is a healthier option. It uses less dough, so it does not feel heavy in the stomach even after a few slices.

The manufacturing process involves a smaller ball of dough that is left to rise longer. This allows it to get stretched further than the dough used for deep pan crust and the classic crust.

It cooks faster than most of the other pizza types at very high temperatures, giving it a crispy texture. It is almost like a cracker when you snap it apart or when you take a bite from it.

However, it also contains just enough air and a bread-like texture inside it, giving it more of the pizza texture we are used to. It does not add much to the overall flavor of the pizza.

The sauce, cheese, and toppings are usually thinner than those used on the other pizza types. The thin ‘n’ crispy crust from Domino’s is just rigid enough for the thinly-sliced toppings.

People who do not love to eat the crust’s edge because it is “flavorless,” you can get the cheesy crust from Domino’s. This is also a common type of crust in most pizza chains. 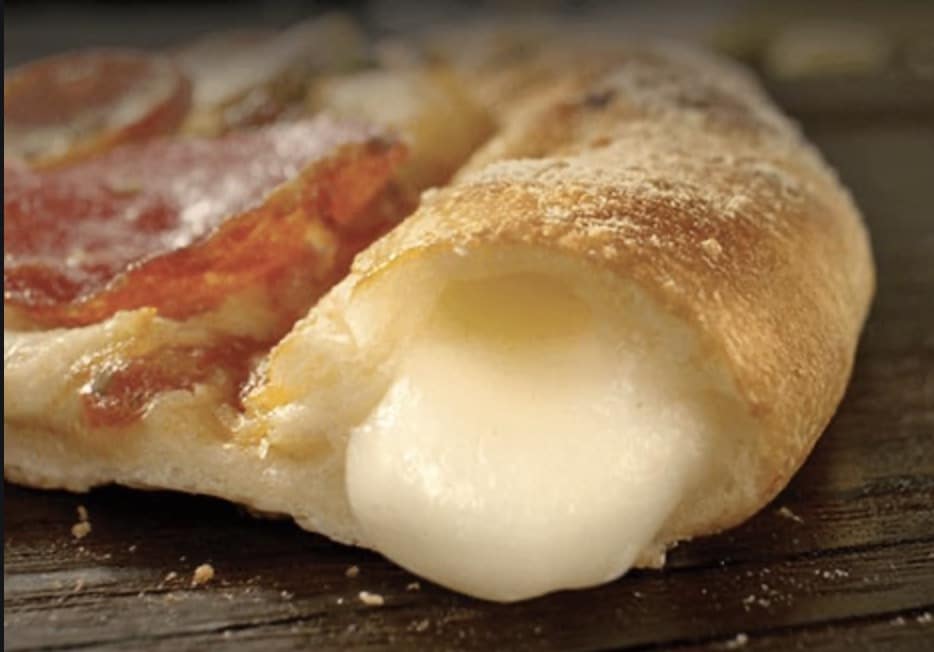 Pizza Hut made this type of pizza crust famous because of its many innovative additions. The crust edge is folded or pushed farther and is made with cheese indie them before cooking.

The edge of the crust folds with a thin slice of cheese under it and then the dough is cooked. The cheese then melts when cooked, so it oozes out from the crust’s edge when you pull a pizza slice.

This is to make sure that you enjoy every part of the pizza and nothing goes to waste. It is also the perfect crust for people who love cheese as you get additional cheese toppings.

The crust, in general, is thin, and the edge has just enough space for the cheese. The edges’ outer parts are crispy, but the crust’s general texture is softer than the other crusts.

The size of the dough used in making this pizza crust is just like the one used for thin ‘n’ crispy crust. You just need to add $3.99 for the crust to have a cheesy edge inside it.

This is another type of crust that is not very well-known, and you cannot order this, especially if you do not know much about Domino’s as it is usually not found on the menu that you see in front.

The same type of dough used in making the classic crust makes the edge crust. You stretch it a little thinner to get the edge flattened and is sometimes pre-cooked alone.

This gives the edge crust very crispy outside parts. The edge itself has a deeper brown color than the other parts of the pizza, perfect with the salty flavor you get from the cheese.

That is why it needs to be thicker than the thin ‘n’ crispy crust to handle the toppings up to the edge. It cooks to become rigid and crispy for the same reason of holding the toppings.

It usually has ground sausages, pepperonis, and a few vegetables as toppings. If you want a pizza that you can eat as a whole without the cheese on edge, then this is the one for you.

For people who are trying to watch their gluten intake, Domino’s has a gluten-free crust. This type of pizza has a “GF” label on it to let you know what kind of crust it is.

It is also, of course, cooked with gluten-free toppings labeled with the same mark. You can select the toppings you would like to put into your pizza and request a gluten-free option.

The crust is usually thinner than the classic crust but is a little thicker than the thin ‘n’ crispy crust. It only costs an additional $2.99 to make your pizza gluten-free. 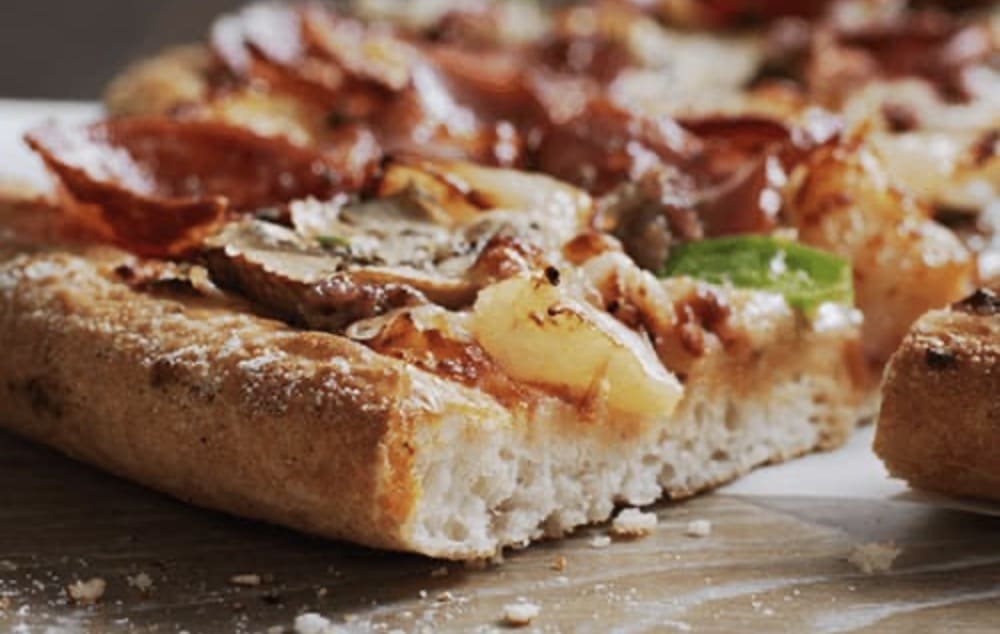 This cust is another special type of crust from Domino’s that has a unique edge. The crust in the middle is thin like the thin ‘n’ crispy crust but has a much thicker crust on its edge.

The crust edge is flaky and has more air inside compared to the other types of crust. This helps, so the edge does not have additional stuffings inside while still being easy to eat.

The puffed crust has a crispy outside and is very light. You can easily eat it like the other edges on most pizza crust that are tough and too compact for eating without other textures.

These different types of crust from Domino’s are great for different occasions. They are made with the best ingredients and can feed you whether you like to have it as a snack or meal.

There are many different options to choose from to surely get one that fits what you want. Just select the toppings that you are craving for and then order.

In just a few minutes, your pizza will be at your doorstep, and you will be enjoying the best crusts that are available in Domino’s.