Sicilian pizza is one of the most common types of pizza in the world. You can differentiate it with the shape and the crust so here we bring you the authentic Sicilian Pizza Dough Recipe.

One way to determine the type of pizza that you have is to look at the crust. You will immediately see if a pizza is Neapolitan, New York, Chicago, Hawaiian, or Sicilian just by looking at the crust.

That is why it is very important to make sure that you make the crust with the best ingredients. The dough is the foundation of the pizza so you need to make it authentic.

Although they may taste the same, the crusts of pizzas differ from each other in the process. Some might need a specific amount of heat and others might require additional ingredients.

So depending on the type of pizza that you want to make, there are certain steps that you need to follow. Here, we have the best recipe that can guide you in making your Sicilian dough.

The initial thought when you make Sicilian pizza is you are going to use a lot of flour. This will help the pizza dough to not stick on the pan and to make it crispier when it is cooked.

Another signature of the Sicilian pizza is that the dough is rectangular. So when you are done with making the dough and you want to lay the other ingredients down, shape it in rectangular.

This does not limit the shape of the Sicilian Pizza to rectangular alone. The dough that you make when cooking Sicilian pizza can still be circle like most pizzas in the world.

So here is the recipe for making authentic Sicilian pizza dough.

P.S. If you want to skip reading everything and want a video then do not worry as we GOT you covered! Check out this video on making the best Sicilian pizza from scratch!

– A half-ounce of dry yeast

– Half teaspoon of salt

Before anything else, get a bowl and then coat it with one teaspoon of olive oil. Make sure that you put the olive oil all over the surface of the bowl and then set it aside.

Mix the warm water, dry yeast, and the sugar in a separate bowl. Stir it continuously until it creates a little bit of foam and then let it sit for at least 10 minutes to activate the yeast.

In another bowl, get three cups of flour and then mix it with the salt. Leave the other cup of flour for your workspace later on in the next steps.

Mix the rest of the olive oil in the yeast mixture and then stir it. Keep on stirring until all the ingredients are mixed evenly and the oil has been spread on the mixture.

Then pour the wet mixture into the flour and salt mixture. Stir it with a rubber spatula so you can scrape off the flour that sticks on the bowl, make sure that you get an even mixture.

Grab some of the extra flour and then rub it in your hands. This should be done when the dough is already mixed properly and is ready to be stretched.

Pour the rest of the unused flour on the table and then get the dough. Place the dough right on top of the flour and then start kneading with your hands as if to mix the flour in the dough.

After around 10 to 15 minutes of kneading the dough, you will start to see it become smoother. Continue kneading until the dough is smooth and elastic and then form a big ball from the dough.

Close and seal the dough by folding the edges inward and towards the bottom. Form a smooth dough so that the air and the other needed gases will not escape from the dough.

Place the dough in the oiled bowl with its bottom edges facing down. Cover the bowl with plastic wrap and then put a towel over the plastic wrap.

Let the dough rise by letting it rest for at least 30 minutes. There is an ample amount of yeast in the mixture so the dough will rise quickly and double its size in just half an hour.

The doubled dough will be enough for at least 2 large pizzas. So cut the dough in half and then stretch it to the desired length and then brush the edges with olive oil.

Top it with whatever you desire and let it cook. The yeast will still continue to do its work in the oven and it will lift the crust giving the Sicilian pizza its classic thick crust with the airy interior. 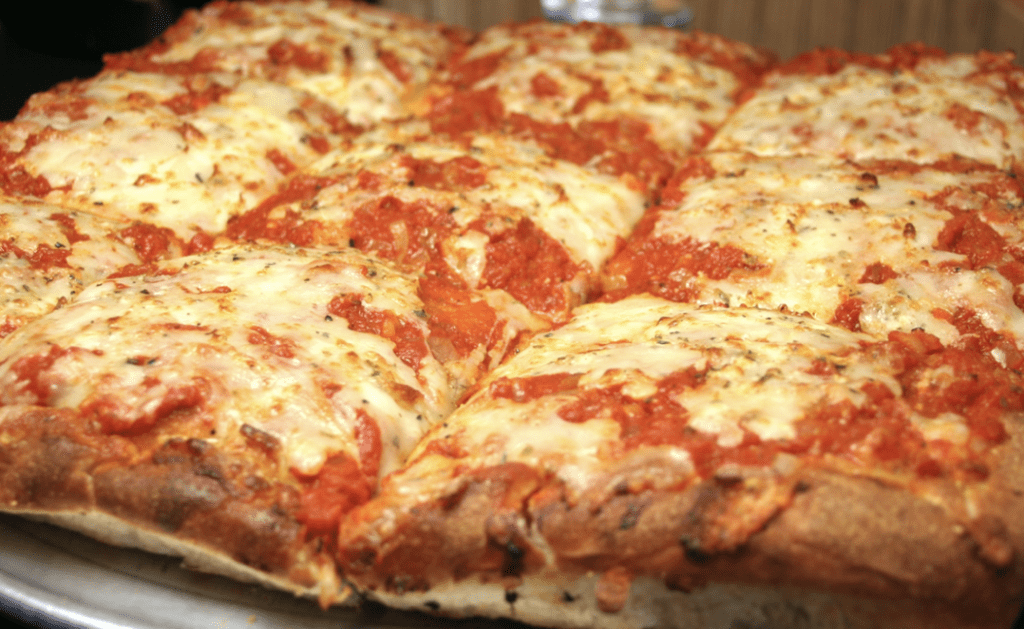 Notice how the recipe separated the other cup of flour? Well, that is for good reasons. It not only prevents the dough from sticking to the pan, but it also helps it get a better texture.

You see the extra flour that is kneaded into the dough gives a crisp finish at the bottom of the crust later when it is baked. This keeps the crust sturdy for when it is topped with heavy ingredients.

It also makes the bottom of the dough crispy giving you the impression of a bread that was cooked under intense heat. The bread-like texture of the crust makes the pizza better.

When you bake a Sicilian Pizza, you would want its crust to fry rather than just bake. So the advice is to use a metal pan so you can brush it with oil and give the crust a better browning.

This is also where the Sicilian pizza gets its rectangular shape. The edges of the pizza will be crisp and have perfect brown color that blends well with other ingredients.

==> Check out my favorite Pan that I use…

It is often compared to the grandma pizza and yes, we admit that they are pretty similar. The difference, however, is that the Sicilian Pizza Dough has an advantage when it comes to rising.

The longer that it is allowed to rise, the better the dough. You see, since the Sicilian Dough rises longer, it gives the sudden boost that makes the pizza crust thick yet crunchy and chewy at the same time.

It also makes the crust softer on the inside. So while it can hold heavy toppings, it can also make a nice texture on the inside that resembles the texture of toasted bread.

The crust can either make a pizza great or it can make it bad. So you have to be careful in choosing the ingredients and the technique that you use when making pizza doughs.

The Sicilian pizza differs from other pizzas because of its crust, first and foremost. It is spongy and thick, unlike most pizzas that have dense yet thin crusts that are also crispy.

The ingredients used in Sicilian Pizza dough are different from Neapolitan as well. It uses sugar to make it brown when cooked and olive oil on the pan to create a nice, crispy, soft texture.

Sicilian Pizza also uses different ingredients on the toppings. For example, the dough is better paired with goat cheese instead of mozzarella or other cheese that comes from cows.

However, in the New York version of the Sicilian Pizza, mozzarella can be used. It also uses a lot of tomatoes that can sometimes overpower the flavor of the other ingredients. 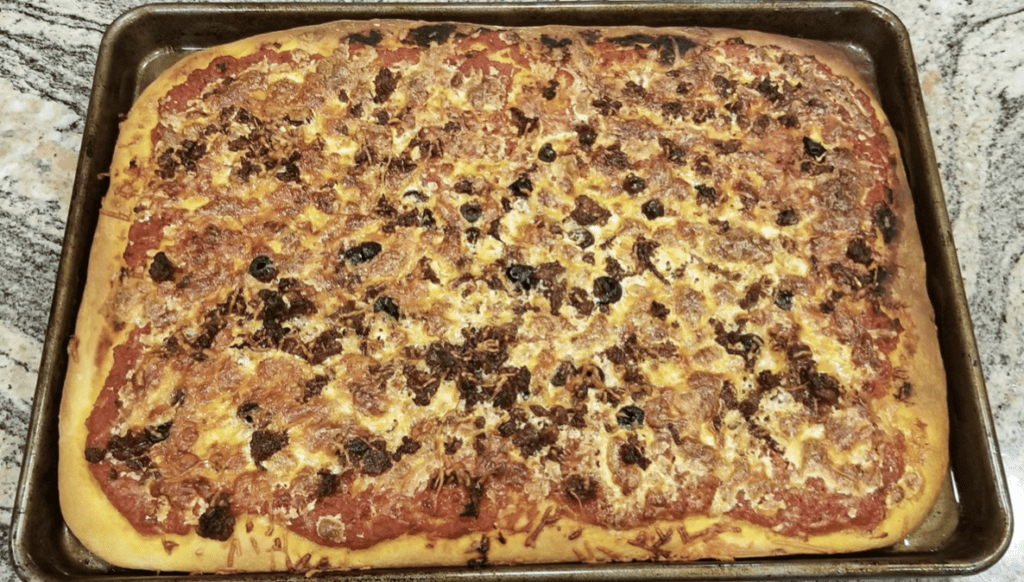 So there you have it, the best recipe for the authentic Sicilian Pizza Dough. This is a very easy recipe and you can do it in your spare time to let it rest when you are busy.

The dough needs to rest for a long time in order to activate the yeast in the mixture and make the dough rise faster. It makes the dough bubbly or spongy when cooked and crispy on the outside.

Sicilian Pizza Dough is a unique pizza dough because it uses a lot of oil and sugar. This helps the dough get a better texture and taste when it is baked on an oil-seasoned pan.

Another important thing about the Sicilian Pizza Dough is that it also requires hands for kneading. You will have a better idea of when the dough is ready or not when you use your hands.

It also gives you the freedom to add more ingredients you want. When you make pizza at home, you get to choose which toppings to put and which ingredients to avoid for the dough.

So, if you want to make the best Sicilian Pizza at home, start with the dough and follow the recipe above. It is really easy to make and you can do it with just the basic ingredients!