Pizza is not necessarily the first food that people think of when it comes to becoming healthy, especially from pizza chains. So what is the lowest calorie Domino’s Pizza?

Domino’s is one, if not the most popular, a pizza chain in the world.

They make many types of pizzas and different crusts, considering their wide customer base, they produce pizzas that fit specific buyers.

Pizza is one of the most delicious foods ever invented.

However, it has a slightly bad image as advertised as a dish that only has TONS of carbs! 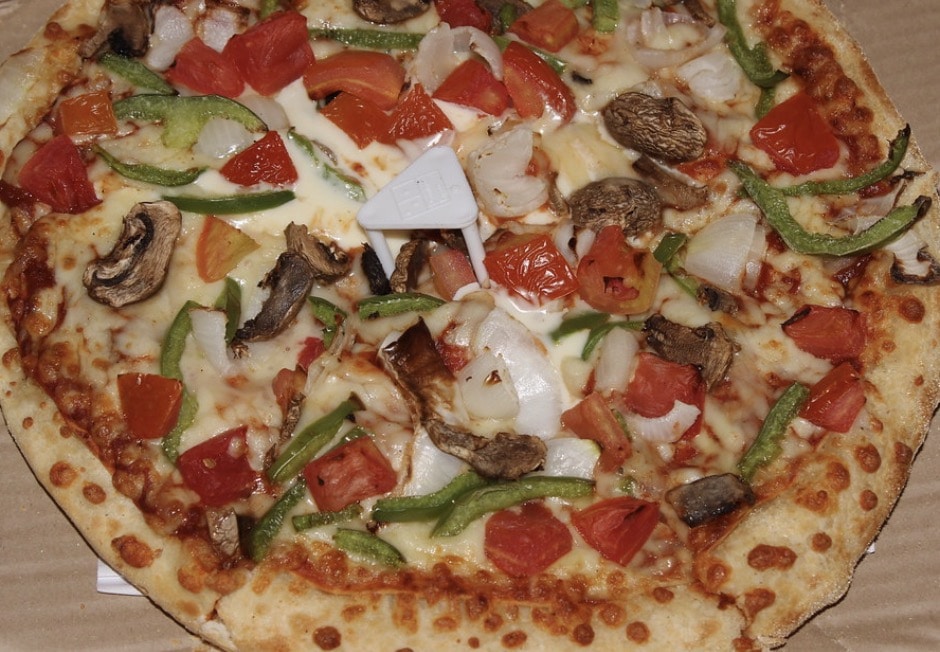 Calorie intake is also a big deal now, especially with people trying to lose weight or adopt healthier eating habits. That means that pizza is not the first choice for a healthy meal.

However, some options are healthier than you think.

Domino’s also makes pizzas that are good for people trying to watch their calorie intake.

Here, we will look at the pizza option from Domino’s, where you can get the least amount of calories and see the other options you should avoid or limit yourself to.

What Is Domino’s Lowest Calorie Pizza?

Domino’s has released more than one option for people who do not want a lot of calories in their diet.

So yes, you have some options for the pizza you get from Domino’s and their different crusts with low calories.

However, there is one that stands out the most regarding this topic, and that is the Thin Crust Veggie Pizza.

This pizza is perfect for you if you want to lose some weight.

You still enjoy the delicious taste of most pizzas without worrying too much about your intake.

This pizza type uses reduced ingredients to make sure it does not have a lot of calories.

A single slice of the Thin Crust Veggie pizza from Domino’s only has 135 calories.

This is both because of the combination of the healthy toppings and the very thin crust on the pizza.

The toppings and cheese are also limited to smaller amounts than the regular pizza from the pizza chain.

That reduces the overall amount of calories and other unhealthy nutrients.

For example, you go with the same toppings, but you switch to the hand-tossed crust, the calories climb up to 180 for every slice, and the sodium content also rises by more than 100mg.

You can also go for other toppings if you want meat but expect the sodium content, fats, and calorie content to go up slightly. Gladly, there are many other options for low-calorie pizzas.

If you are truly committed to your diet, then this pizza might not be as hard to eat as you think. It is still flavorful and the perfect texture, but you can always go for a slightly higher-calorie pizza.

How Many Calories In A Domino’s Regular Pizza?

If you order straight from Domino’s, the regular hand-tossed pizza crust gets selected by default until you change the option.

The average Domino’s pizza contains calories but not a lot and when you eat in moderation things would be good.

You still need to be specific when ordering pizzas at Domino’s because of the many options. On average, customers order the 12-inch pizza from the pizza chain or go for the larger 14-inch.

For a one-topping pizza, there are 200 calories on each slice. So as you can see, there is a huge spike in the pizza’s calorie content compared to the Thin Crust Veggie pizza option.

That is the average pizza or the regular pizza’s calorie count from Domino’s. You can change the calorie content of that pizza when you specify the order and go for a thinner crust and such.

Now you know the average and the pizza with the least amount of calories from Domino’s, but what about the menu’s largest pizza? Let us take a look at one of the fans’ favorite pizzas.

Calories In A Domino’s Extravaganza Pizza

The extravaganza pizza from Domino’s is one of the favorites because of its delicious combination of topping.

It is the perfect pizza for meat-lovers and a large appetite.

This type of pizza combines pepperoni, Italian sausage, beef, onions, green peppers, mushrooms, and black olives. It is a large pie loaded with these layers of toppings.

Along with the many toppings, this pizza has extra mozzarella cheese on top of the toppings.

So there is no doubt that this pizza has one of the most calories in a single slice.

If you eat this pizza, you will be getting somewhere around 370 to 390 calories for every slice.

There is also a lot of saturated fat in the pizza, so it is not the pizza to become healthier.

So if you are trying to watch your calorie or sodium intake, you might want to limit or refrain from eating the extravaganza pizza from Domino’s and go for the healthier options.

There have been many issues about Domino’s, especially on the internal and business side, but in this post, we will be focusing more on the bad things about the pizzas they produce.

Pizza itself already has a bad reputation when it comes to making people healthier. However, there are also some bad sides to Domino’s pizzas that you cannot find in other pizzas.

The first thing that you will find on the list of the bad things about Domino’s pizza is the one from the United Kingdom. There is an issue that says you cannot make vegan pizzas in the UK.

This is because the base used in the pizzas in the UK has an ingredient derived from milk. So you might want to take a look at other pizza chains if you are in the UK for vegan options.

Another issue with Domino’s Italian base with confirmation from one worker is that the so-called Italian base uses the same ingredients as the regular base. 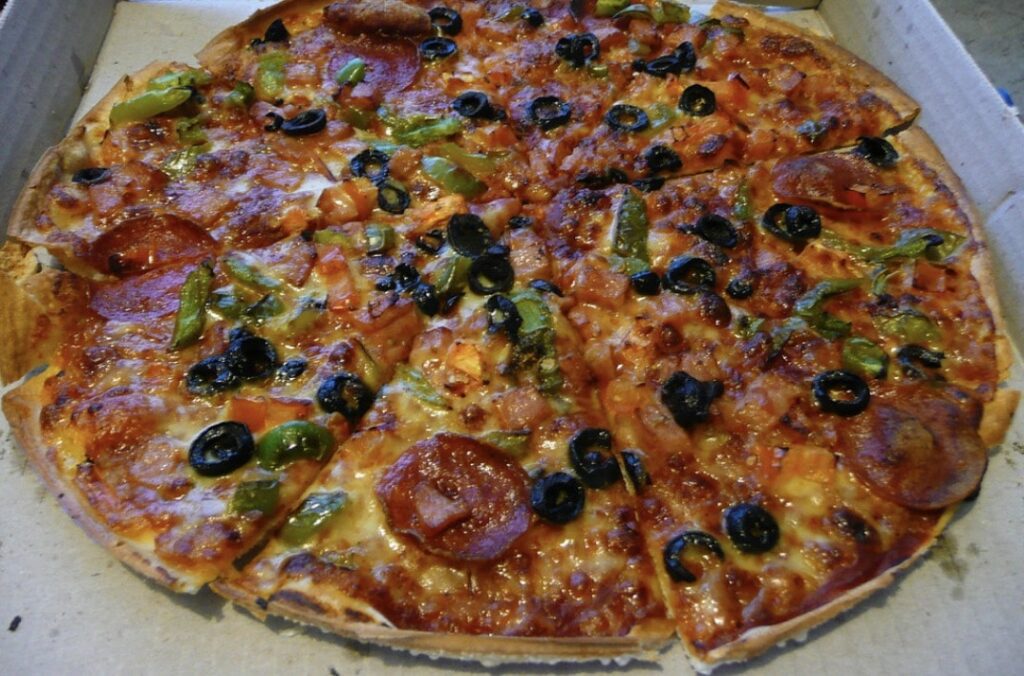 There are no differences between the regular base and the Italian base from Domino’s. The dough used in each base is the same, so do not get fooled by the title.

Now, enough with the speculations, and let us get into the details on the pizzas.

The famous and delicious garlic & herb dip is high in calories even without the pizzas themselves.

There are 675 calories in one big dip, which is a lot more than the calories you get in one slice of pizza.

Although it is supposed to be shared by four people, it might not be true once you taste it.

It is irresistible, so sharing one dip between four people will be too hard.

So you need to watch your intake and make sure not to add more calories to your body from the dip itself.

Also, you can track the pizza online and even know its location once it is out of the store.

So it is best to keep track of the pizza by using the order tracker app.

If you order four different toppings from Domino’s, you will get less of them all as they wisely adjust the portions.

However, we do not need to end on a bad note, and Domino’s reduces the portions if you order four toppings or more so that the crust does not become soggy on its way to you.

Other Low-Calorie Options From Domino’s

Aside from the Thin Crust Veggie pizza, you can make orders from Domino’s and select these other options so you can enjoy our pizza without worrying too much about your calorie intake.

If you are not conscious enough about your pizza’s sweet flavor, then this option is a great one. It only has a calorie content of 145 calories for each slice with 2 grams of saturated fat.

With the combination of sweet and salty, you will be able to enjoy your pizza if you think pineapples belong to pizzas. So order yours now and keep your calories down.

Pizza is already great by itself, but you can never go wrong with another recipe on the side.

Many options from Domino’s are low in calories and are perfect with pizzas.

First, there is the Spicy Pineapple Jalapeno Chicken that only has 170 calories.

This is a protein-filled side dish that you can enjoy with the vegetable toppings on your pizzas.

You can also go with an even healthier option with the Classic Garden Salad without the dressing. With only 120 calories, you will be full before you know it but without the harmful minerals.

There is also an option to mix the salad with the chicken with the Grilled Chicken Caesar Salad, which contains only 170 calories and 19 grams of protein without the dressing.

If you want your pizza to have fewer calories, you can also order the same pizzas you love from Domino’s and request less cheese to bring down the number of calories.

It is not a lot of difference as the total calories in each slice will only be brought down to about 10-20 calories, but it helps to know that you have limited your calorie intake.

Domino’s did not become the greatest pizza chain in the world for no reason.

It has great and different types of pizzas that you can order anytime and almost anywhere worldwide.

However, if you are trying to lose weight, pizza is not the best go-to food, especially from pizza chains.

So it is best to be specific with what you want to order to control your intake.

Luckily, Domino’s offers options for people who are trying to watch their calorie intake.

There are a few pizzas and some delicious side dishes that you can order with your pizza for a healthy meal!