Some people prefer eating their pizzas whole while others prefer leaving out the crust.

With the introduction of the stuffed crust, less waste left on the table.

Stuffed crust is an innovative type of pizza that gets people to eat the rather bland and elastic part of the pizza.

It is usually thick and has no sauce nor toppings on it so it gets left uneaten. 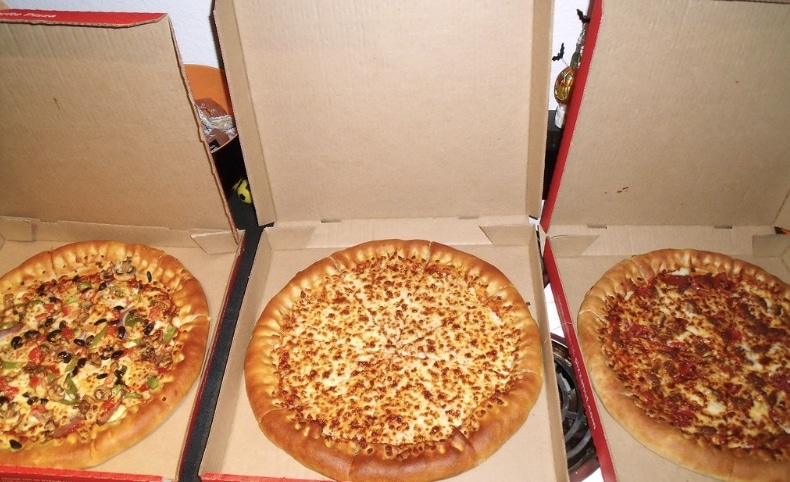 The edge of the pizza is usually the crispiest, so by adding more flavor to it, more people love the idea that they still have a little bit of flavor and other textures on the crust when they eat it.

Pizza Hut has been the pioneer of many pizza types, and perhaps the most famous pizza they have introduced is the stuffed crust.

This has garnered a lot of attention and good reviews.

Papa John’s is one of the most famous pizza chains that has jumped into the trend and has made its version of the stuffed pizza like Pizza Hut. So let us see how they put up with each other with this comparison.

The presentation and overall look of the pizza are important to some, but the epic flavor makes a difference. Here, we will look at the overall taste of each calorie-filled stuffed crust pizza.

I went with the more familiar cheese and pepperoni pizza which was delightful and full of flavors.

I find it salty on some parts of the pizza, so other people might not like it and it also has a lot of calories.

Pizza Hut Cheese Maxx or Cheesy Bites is known for its savory toppings, and you can taste that with the best stuffed crust pizza and its toppings.

The only thing I would change about the pizza is its saltiness as it is not too salty but might be for some. The Papa John’s stuffed crust pizza with spinach and cheese as toppings.

This pizza has a lot of flavors as well, and it can satisfy your palates.

I also tried the version with meat and cheese and I have to say that the thick hand-tossed thin crust combined better with this option.

The overall taste of the Papa John’s stuffed crust pizza is great, but it does not quite match the Pizza Hut Cheese Maxx or Cheesy Bites version.

It was blander, but it did not lack the usual and epic flavors you would want on a pizza.

Taste Of The Crust

The crust is the main hero in this comparison, so we will compare the overall taste of the crust.

We will also look at the texture of the hand-tossed cheesy crust and see which one you would prefer.

The Pizza Hut Cheese Maxx and Cheesy Bites crust is golden with a little bit of dusted flour on top.

This made the hand-tossed crust engaging and you would want to dig into it even after you have eaten the other parts.

The crust was buttery and was full of flavor with the cheese oozing out in every bite, this has a lot of calories so you might want to take it slow if you are watching your calories.

It is perfect for people who love cheese as the crispiness on the outside and airiness inside blended well.

Papa John’s has a thick side cheesy crust, making you think it has a lot of stuffing inside.

The answer to that is yes and no as the stuffed crust had much more stuffings than Pizza Hut’s.

However, the proportion between the bread and the cheese inside is not quite balanced.

You get a chewy hand-tossed crust because of its thickness and is flavored by the satisfying cheese.

The Sauce Adds To The Flavor

The sauce used in pizzas is a huge factor as it is the binding flavor for the other ingredients.

It should be good or ruin the whole pie even if the other ingredients are exceptionally good.

The Papa John’s sauce for their best stuffed crust pizza is made from pizza sauce, but you get the slight hint of marinara. It has a certain amount of tanginess that affects the overall flavor.

This, combined with vegetable toppings, is perfect as it reduces the amount of bland taste in the topping ingredients.

It also helps that the vegetable toppings are cooked perfectly with no bitter taste.

The Pizza Hut sauce is something that does its job, it binds the other flavors, but it also does not overpower the overall taste of the pizza.

It is well-balanced and combines with the other ingredients.

There is a bit of sweetness in the overall salty taste of the pizza while your mouth is tricked to eat more with the tanginess that comes with it. So I enjoyed the balanced taste of Pizza Hut.

The Cheese In The Stuffed Crust

The cheese on the pizza itself is quite indistinguishable when you compare Pizza Hut and Papa John’s. What separates them is the actual cheese inside the stuffed cheesy crust and the texture too.

Although both companies use the same type of cheese on their best stuffed crust (mozzarella), they do differ in taste sometimes. The Pizza Hut version is more on the salty and savory taste.

Papa John’s version comes with an overall balanced taste because of the thick crust.

A bigger portion of crust or dough comes with the cheese, so it also tastes milder.

The mozzarella cheese on the Pizza Hut stuffed crust is a melted version that goes well with the crispy exterior.

It truly balances the thin crust of the pizza, and you get the taste in each bite.

Papa John’s version is more satisfying where the mozzarella cheese does not affect the flavor.

It also comes a little drier than the Pizza Hut version.

The Garlic Sauce On Both The Pizzas

When you order from both of these pizza chains, you get to have your sauce of choice.

It usually comes with the hot sauce or a dipping sauce of your choice, but garlic is one of the best.

Papa John’s has a garlic sauce that comes with the stuffed crust pizza, and it is a great dipping sauce.

It comes in with a thick texture and a taste that blends well with the crust.

I do not usually use the sauce when I eat the pizza from the center.

What I mean is that I usually only use the garlic sauce on the crust, but there is a savory flavor that you cannot just resist.

Pizza Hut’s version is more on the runny side, and it comes in a larger portion. The large portion might not be for a single person unless you are not new to large pizzas and you can finish one large one by yourself.

It is delicious as you can taste the garlic in it, but I was not the biggest fan of the runny texture.

The flavors still have the perfect profile for the meat toppings, and I loved it, but I prefer the stronger taste on the Papa John’s garlic sauce and the texture with the pleasant aftertaste.

I prefer the pizza hut as it gets all the flavors that I want. However, I have to acknowledge the slatiness in the stuffed crust pizza as it did have a few imbalances, it can maybe make up with the meaty Epic pizza but it is not for vegans.

The saltiness was great and perfect for my taste, and this is one of the trademarks of Pizza Hut. I would, however, recommend that you order a pizza from them and suggest lower sodium.

It is not appealing for other people, but for my palate, it was perfect. The melted cheese almost drips out of the cheesy crust was epic, and the overall flavor.

There is the pan version of the stuffed crust but it has been discontinued. The pan stuffed was great and people liked dining in with the pan in front of them so I hope Pizza Hut brings back the pan version.

Papa John’s is a great version of stuffed pizza as well. While it was not as good, it did have a lot to offer, and you can taste that from the pepperoni pizza I got.

I would go with Papa John’s version if I wanted more pizza crust as the thick edges that still have stuffed content with slightly melted cheese is perfect for my big appetite.

It also has an impressive flavor combination.

There are differences with the thin crust and stuffed crust in price but you can somehow lower the price you pay with coupons. These coupons are available online or you can get the coupons in the store you want.

I have tried using coupons for Pizza Hut and Papa John’s and it was easy. Yes, the price difference was not that big but it helps so you do not always have to pay the full price.

I would go with the Pizza Hut stuffed crust. It is the original version and it is called a pioneer because it is a great stuffed crust pizza with every flavor that you want.

The Papa John’s version was good, and it did satisfy my palates, but there is just this difference that you taste from Pizza Hut. the flavors and the textures are balanced well.

I love the crispiness on the exterior of the pizza as it goes well with the melted cheese inside.

The variety of toppings like pepperoni that you can choose from is also great so you can experience other flavors.

Papa John’s new version is great, but there is room for improvement.

The cheese did not complement the drier crust as the cheese itself did not melt with the thick crust.

If you are looking cheesy crusts for vegan options, then you might want to look for other chains. The cheese and other ingredients used are not vegan-friendly on both so the cheese-stuffed option is not for vegans.

Other Pizza Chains That Do Stuffed Crust Pizzas

1. DIGIORNO Cheese Stuffed Crust Five Cheese – this is a company known for their frozen pizzas, so you can get the new cheese-stuffed crust version and enjoy making stuffed crust pizza at home.

3. Bosco’s Pizza – this pizza chain also makes delicious cheese-stuffed crust pizzas. With many new toppings to choose from and a delicious sauce along with crispy crusts and melted cheese inside.