When it comes to cooking Neapolitan pizzas, you can count on the Ooni Karu and Gozney Roccbox to deliver an authentic performance. These two portable ovens are all you need to make that amazing pizza.

Ooni has recently released a Kickstarter campaign last year and has been getting a lot of attention even before the release of the new Ooni Karu. Gozney made sure to be in the competition with their portable Roccbox.

The prices of these two pizza ovens are very far from each other. The Gozney Roccbox has a jaw-dropping  $700 price tag while the Ooni Karu is sold at half the Roccbox’s price at $350.

Both ovens can reach the optimal 932 degrees Fahrenheit for crispy crusts in pizzas. They can cook an amazing pizza in under 60 seconds because of the amazing heat retention of both ovens.

Both ovens also use multiple fuels. They can both be fired with wood and gas as fuel.

If you are having a hard time on which oven is best to invest in, I am here to help you. Here, we will discuss the multiple similarities as well as the differences between the two.

I hope you get to decide on whether the Ooni Karu or the Gozney Roccbox is better for you by the end of this comparison.

The Ooni Karu is made out of high-grade stainless steel. It covers most of the oven and can be seen as the main shell of the oven.

Ooni used a 430-grade metal for the Ooni Karu. This metal contains 0% nickel and is able to block the natural elements and boasts a very lightweight body so it can be carried around.

The handles on the Ooni Karu are made out of glass-reinforced nylons that are cool to touch. You do not need protection for opening the oven even at its highest heat because of the cool-to-touch handles.

The Ooni Karu also comes with a 0.6-inch baking board. With its relatively thick board, it is perfect for distributing heat evenly on its surface.

The baking board comes in with the oven and is made out of cordierite. This material is perfect for retaining heat.

Ooni Karu is really a lightweight oven. It weighs just under 26 pounds or 12 kilograms. This can be great for carrying the oven around wherever you want to cook.

The Roccbox is designed like a miniature brick oven. The round top has either green or gray coating along with a thermometer on the left-hand side of the oven.

It has a high-heat silicone cover and a silver stainless steel front. The silicone cover is great as it cannot be damaged by heat but it does heat up easily which is hot to touch so make sure to avoid it when the oven is blasting.

The stainless steel front is great but it gets covered by soot after a few uses. You might need to clean that every now and then.

The Roccbox comes with two attachments for fuel. One for wood and another for propane gas. 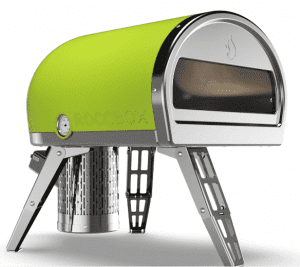 The Gozney Roccbox does not have any doors and handles. However, it comes with a velcro strap that can be used to carry it around but it does not remove the awkwardness of carrying an almost 50-pound oven.

When it comes to design, I prefer the Ooni Karu as it has features that make it suitable for outdoor cooking. It is lightweight and has handles for proper heat control.

However, the Roccbox has an analog thermometer attached to the side of the oven. This is more practical for checking if the oven is hot enough instead of getting a separate thermometer that is as accurate. 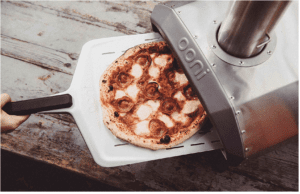 The Ooni Karu can reach the ideal temperature for a crispy crust of 932 degrees Fahrenheit or 500 degrees Celsius in just 15 minutes.

This heat is also perfectly retained for a period of time because of the amazing insulation inside the oven.

With this temperature, you can cook an amazing Neapolitan pizza with the perfectly cooked crispy crust in 60 seconds or less.

The time of cooking depends on how thick your crust is.

The Ooni Karu uses propane gas, wood, and charcoal as fuel. It is designed primarily for wood as fuel so you might need to purchase Ooni’s gas burner attachment for you to be able to use gas fuel.

You do not need to worry about constantly cleaning the Ooni Karu. The ashes from the wood you use fall right off of the oven.

Thanks to its stainless steel shell and ceramic fiber insulation, the Ooni Karu gives off an amazing heat and retains it for a period of time. 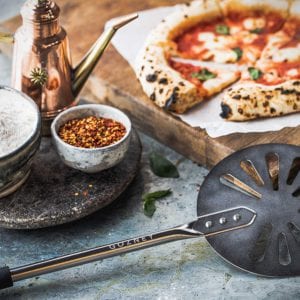 This means that the oven can still maintain a temperature of 500 degrees Fahrenheit. This heat can be used to cook pizza with a chewy crust if that is what you prefer.

With Ooni’s own patented flamekeeper technology, you can expect the Ooni Karu to give off 500 degrees Celsius even when your fire is out.

The Roccbox can also heat up to 932 degrees Fahrenheit but it just takes a longer period of time of 30 minutes.

The heat is retained perfectly as well and you can track your temperature with its thermometer in both Fahrenheit and Celsius.

When the Roccbox gets up to its hottest temperature, you can cook a pizza within 60 seconds.

The Roccbox also uses both gas and wood as fuels. They come with their own attachments and you can change these attachments easily with just a turn.

There are some requirements about what kind of wood to use with the Roccbox.  It is only compatible with hard, non-treated wood.

This means that you can use oak, ash, and fruit trees such as apples or pears. You cannot, however, use any recycled wood such as furniture or pellets, along with cedar, redwood, fir, and such.

The Roccbox oven also requires you to put wood as fuel with exact dimensions. It needs small pieces of wood of around 5 inches long and an inch thick, so unless you chop the wood with that dimensions, you will find it hard to fit bigger pieces of wood in the attachments.

However, when used with propane gas, the Roccbox performs great. The heat retention combines great heat replacement and insulation for an excellent performance.

The Ooni Karu features a detachable chimney that can be installed or uninstalled with just a twist. It was made after a few tries and Ooni came up with an ingenious design of just making it turn halfway to lock or unlock.

The chimney can fit inside the oven itself. This makes the oven more portable and does not need a large compartment for storage.

The feet are foldable as well. With the feet completely folded and the chimney removed, the oven basically turns into a basic structure with no chimney and other features that make it hard for it to be stored. 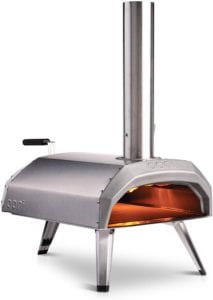 It is also light so you can store it in cabinets and make and it is always ready for use. You can set up the whole oven in under 5 minutes.

The Roccbox, on the other hand, is a much heavier oven. Almost double the Ooni Karu’s weight.

The Roccbox weighs 44.1 pounds or just over 20 kilograms. This is still bearable but you might find it tiring to carry it around in long distances.

The Roccbox does not feature a chimney so it is simpler when looking at it. Its legs are foldable as well so it only requires a small room for storage.

The Roccbox also comes with those fuel attachment so you need to bring them along with the hose for the propane gas tank.

The Ooni Karu is more portable and it is a lighter oven. So it can be carried around anywhere without any inconvenience. The Roccbox, in my opinion, is not designed for mobility because of its weight but more or less. it is manageable.

The Ooni Karu is also more portable as you can fit the features inside and somehow make the oven a one-piece appliance. Whereas the Roccbox has its separate attachments that you need for both wood and gas fuels.

Cooking inside the ovens

The Ooni Karu and the Gozney Roccbox can both reach the optimal 932-degree temperature for the crispy crust on pizzas.

The Ooni Karu heats up faster but the Roccbox can make up for it with its amazing heat retention. They can both cook pizzas in under 60 seconds.

You can use wood as fuel in both ovens. Using wood when cooking pizza inside the ovens makes the pizza more authentic.

If you do not want wood or if you run out of it, then you can use propane gas in both ovens. Using propane gas lets you take better control of the temperature in the oven.

Cooking pizza is the main function of these ovens. But who said you are only limited to pizzas?

You can cook other dishes inside these ovens. Just prepare them in a pan and put it inside and you will have your perfectly cooked food in no time.

You can sear your steak inside the ovens, caramelize onions and apples, or grill your fish as well. There are a lot of recipes that you can find on their websites and you can try them with your ovens.

These ovens have their own specialties and they are nothing short of amazing.

The Ooni Karu is a lightweight oven that allows you to cook wherever you want. You can easily carry the oven around and enjoy both nature and pizza at the same time.

The Roccbox has its features as well. It performs with excellence when used especially with propane gas.

The main difference aside from their weight is the price. The Roccbox is sold at $700 while the  Ooni Karu is at $350- half of the Roccbox.

You might think that because the Ooni Karu is cheaper, then it has a possibility that it used low-quality material. But the Ooni Karu is a high-grade oven that uses cheaper materials for a lighter weight. It really is designed for outdoor cooking.

The Ooni Karu Pizza Oven comes with a three-year warranty as well so you might want to try it out and get the best for your buck. A higher model would be the Ooni Pro which is a muti-fueled pizza oven from Ooni similar to the Roccbox.

The Roccbox is nothing short of amazing when it comes to the materials that were used. It also adds the thermometer that makes it much easier to control the temperature when you see it right away.

You even get the gas burner and the wood burner along with the pizza oven in that price.

So, the Roccbox comes with everything you need while the Ooni Karu needs the gas attachment to be bought separately which adds to the cost. But since the Karu is cheaper the overall cost of Karu and the gas burner is still lower than the Roccbox.

You get a year of warranty with the Roccbox Pizza Oven.

==> Get the Best Deals on Roccbox

Eventually considering the total price, the Karu would easily average up to $450 and the Roocbox considering the cooking space has a lot more possibilities of cooking to offer.

So this should help you decide which oven is better for your needs-  Ooni Karu is better if you prefer to cook outside the house often. It is more portable and you can move it around with ease.

If you have a catering business or the like, I would recommend the Roccbox for you. It has amazing power and performs great with propane, so if you like cooking inside then this oven is for you.

If you have the extra cash to spare then Roccbox is our final choice among the two pizza ovens.

Do tell us which one is your favorite pizza oven!