Cooking pizza is one of the best ways to make your recipe at home. There are many ways to cook it, and making a pizza on a Char-broil grill is not that hard once you get the techniques.

Char-broil grills are perfect for cooking almost anything that you want. They might not be the most powerful grills on the market, but they can cook most recipes that you want on a grill.

There are many options that you can choose from, Char-broil as well. I have chosen to cook pizza on a gas-powered grill from Char-broil as it is more convenient to use for this recipe.

Other options use charcoal for a more authentic taste and texture on your pizza, and you can choose them for this recipe as well. They are also very easy to use. 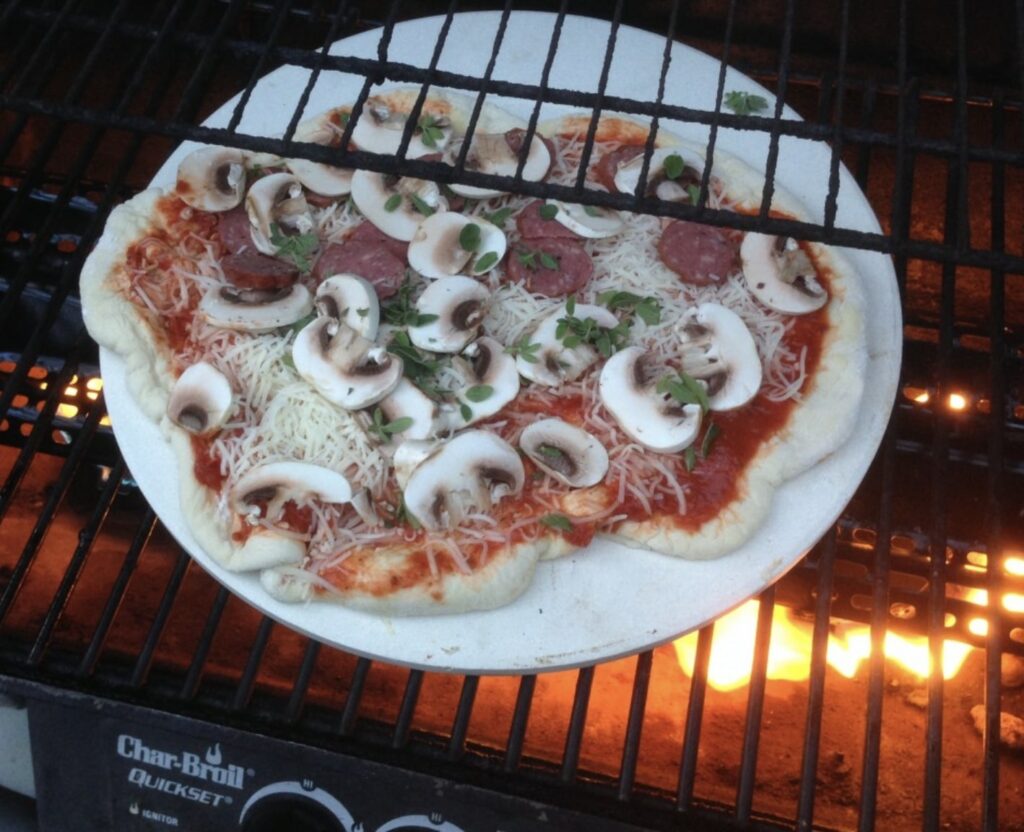 Like the grill that we will be using here today, pizza is also a versatile recipe. You can customize it however you like, so you get to put the ingredients that you want in it.

If you are a beginner, I recommend following the recipe below, and then once you master the basics of the process, you can then customize the ingredients later on for your recipe.

What You Will Need

I have chosen to go all fresh for this recipe, and no other ingredients are processed before preparing them. That way, you can cook the best pizzas with the fluffiest and crispiest crusts.

If you can get fresh dough, that is great, but I suggest trying to make your own. This will take some time so you can practice during your free time and perfect your dough.

Making your pizza dough does not take much. All you need are the basic ingredients, namely flour, water, olive oil, yeast, and salt, to make the best pizza dough for a crispy crust.

Aside from that, you will not need a lot of ingredients for this recipe. Just get your pizza sauce and cheese, and you can start preparing the pizza while the Char-broil grill is preheating.

The pizza sauce can be the ones you buy from the market, or again, you can make your own. It is easy to make especially considering that pizza sauce is not something that you cook.

Mozzarella cheese is perfect for this recipe, but you can also get your favorite type of cheese on a pizza. Make sure that you get enough to spread all over the pizza toppings later on.

If you do not have much time and just want to experience the cooking process, you can always go with frozen pizza. We have a guide on that, so keep on reading until the end.

Once you get your ingredients, you are now ready to cook your pizza in a Char-broil grill. So read on the following instructions and follow them to make your best pizza on a grill.

Mix all the ingredients for the dough and add water or flour according to the consistency. You will need a dough that is slightly sticky but not enough to stick on the bowl.

When you mix the dough, all of the bits should come together. Before mixing the dough ingredients, you need to activate the yeast first, so get a small cup or a small bowl.

Put the yeast on the small bowl and then pour warm water over it. Wait for a few minutes until the water starts to bubble up, indicating that the yeast has been activated and is ready to use.

Add it to the flour and the other dough ingredients and mix them. Once you get to the right consistency, you can then cover the bowl with plastic wrap and let the dough rise.

I only used vegetables as toppings for this recipe, but since you have a grill ready, you can put some meat on the pizza. Just make sure to cook them ahead of time.

The vegetables are sliced and preferable into thin slices so they will cook evenly and quickly. There is no need for too many toppings as it will only weigh down on the dough, which can make it soggy.

You can also grill the vegetables ahead of time, so the cooking process becomes shorter. I suggest doing this once you master the basics, as it can be tricky to do this on your first try.

Once the dough has doubled in size, remove the plastic wrap and cut it into even portions. Get one ball of slough and then knead it to shape until it becomes a 12-inch crust for your pizza.

Arrange the pizza by starting with the pizza sauce. For a 12-inch pizza, one tablespoon of pizza sauce will be enough as long as you spread it evenly, leaving half an inch of the edge.

Place the sliced vegetables on top, and then sprinkle the mozzarella cheese on top. If you have meat toppings, cook them first and then distribute them evenly on top of the pizza.

Once the pizza is ready, cover it, so it does not get contaminated. Preheat the Char-broil grill to maximum temperature and then close the lid to create an oven-like environment inside the grill.

There are different maximum temperatures on each model of Char-broil grills, so the rule of thumb is to preheat the grill for 15 minutes before placing the pizza inside the grill.

Once it reaches the maximum temperature, which is around 300 to 400 degrees Fahrenheit, the pizza inside the grill uses a pizza peel. You can use a pizza stone as well when cooking. 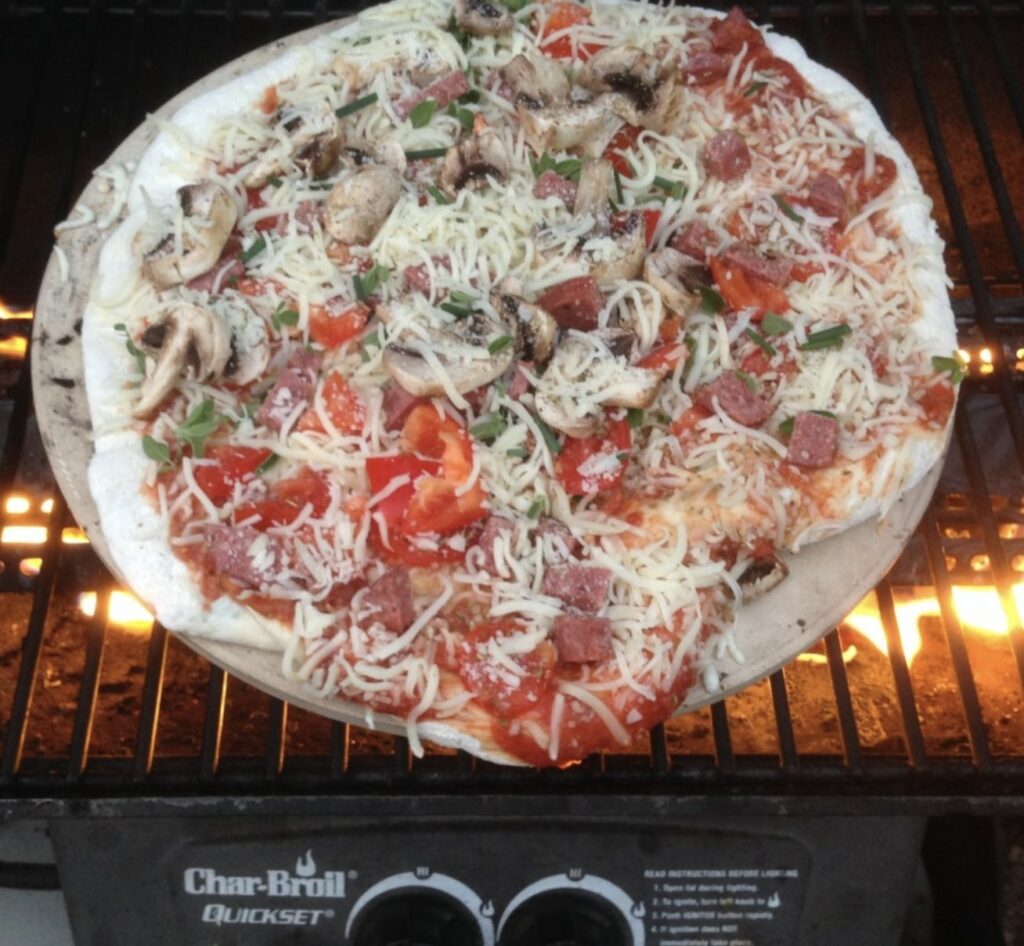 If you use one, make sure to preheat the pizza stone along with the grill. If you do not have a pizza stone, you need to pre-cook the dough before putting the toppings on it.

Cook the dough directly on the grill grates first until it hardens. Flip it over and then arrange the toppings and other ingredients on the dough and then close the grill to let the pizza cook.

From there, you will need to wait around 8 to 10 minutes before checking. Ensure that the crust cooks with a golden brown color, and the cheese should be melted or bubbling.

Let the pizza rest for about 3 minutes before slicing and serving it.

This one is a pretty easy way to make pizza with a grill. Just remove the pizza from the packaging and then let it rest at room temperature for about a minute but do not thaw it completely.

Set the temperature according to the instructions, or as a general rule of thumb, cook the pizza on high heat for 5 to 6 minutes, especially if the pizza has a very thin crust.

If it has a slightly thicker crust, it is best to cook the pizza over medium heat for about 12 to 15 minutes. Let it cook until the crust is golden brown and the cheese is melted or bubbling.

Let it rest for a few minutes, and then serve!

There are many ways to make pizza on a grill. You can follow the basics of the recipe above and make your pizza later on by customizing the ingredients used.

Frozen pizza is also no problem for the Char-broil grill. Just make sure that you keep an eye on it to not go overcooked, as cooking the pizza will not take that long.

Make sure to follow the instructions above and make the best pizza with your Char-broil grill. With just the right ingredients, you do not need a high-end oven to make your amazing pizzas!