Making your own pizza at home can be time-consuming so tossing a frozen pizza in the microwave is all that we can do. However, it really does not give the authentic flavors that we want.

That is why we are glad to say that you can make a nice pizza in the microwave without sacrificing the flavor. It will take longer but it will taste better than the frozen pizza that you have.

We also encourage you to make your pizza at home. So if a microwave oven is all that you have, we can make that plausible as we have a recipe for a microwave pizza.

The real authentic taste that we get from most pizzas comes from the intense heat that is usually used in cooking them. However, that is hard to attain with microwave ovens.

A wood-fired pizza is hard and next to impossible to replicate using just convection heat. That is why frozen pizzas are the most common pizzas to make in a microwave oven.

But as we have slowly understood the ways on how a pizza should be cooked, we figured that there is a possible solution to cook the fresh dough on a microwave oven and get a nice result.

It may not be as good as the wood-fired pizzas that you are used to but it is way better than what most people expect. It takes more time to cook a pizza in a microwave oven but it will be worth it.

Now, in order for you to get a better understanding of how long you should cook a pizza with fresh dough and fresh ingredients in a microwave oven, we have a recipe for you.

Scroll down to the last steps to find out the exact time needed to cook a pizza inside a microwave oven. If you want to know how I made the pizza then you should pay attention to the initial steps that discuss the recipe in detail.

TIP- YOUR PIZZA SHOULD NOT TAKE MORE THAN 20 MINUTES TO COOK INSIDE A PIZZA OVEN.

Vegetarian Pizza on a Microwave

We used vegetables in this recipe simply because they cook faster than meat. This technique of making pizza in a microwave oven can also be used with meat toppings.

– Half cup of pizza sauce

Microwave ovens have many options for cooking. For this recipe, we figured that it is best to use a microwave oven in its convection mode.

So set the microwave oven to convection mode and let it preheat at 200 degrees Celsius or around 400 degrees Fahrenheit which will take only around 5 minutes.

As you may have noticed, the microwave oven does not have any form of direct heat transfer inside so you will need it to go as hot as possible.

After letting the dough rest for a little bit, lay it down on a well-floured surface and then stretch it so it makes a 10-inch pizza crust.

This will be enough for the toppings as you will not need too much. The larger the pizza is, the longer and the harder it will be to cook it in the microwave.

Brush the stretched pizza dough with olive oil all around it and then make some small cuts on it. You can use a knife and score the dough carefully or simply poke holes through it with a fork.

In this recipe, we used a 10-inch round baking dish. The baking dish should also be greased thinly so that the pizza crust will cook more evenly.

So after stretching the dough and putting holes in it, lay it carefully in the baking dish and then spread the sauce all over the pizza in an even manner leaving about half of an inch on the edges.

Now, for this next step, you can either put the cheese first and the vegetables or vice versa. Putting the vegetables first will prevent them from overcooking so that is what we did here.

Place the vegetables evenly over the pizza sauce and then sprinkle the grated mozzarella cheese on top. Also, make sure that you have sliced the toppings thinly so they do not go undercooked.

You can also use other kinds of cheese such as parmesan, cheddar, or a mix of all of them. You can then finish the topping with a little bit of olive oil drizzled over it.

After finishing the pizza toppings, the microwave oven should have reached the desired temperature already. So put on your safety gloves and slide the baking dish in the microwave.

Close the door and set the microwave oven to baking and let the pizza bake for 20 minutes at 200 degrees Celsius or 392 degrees Fahrenheit.

After 20 minutes, look inside if the cheese has melted over the vegetables and if so, switch off the microwave oven, and remove the pizza out of it. 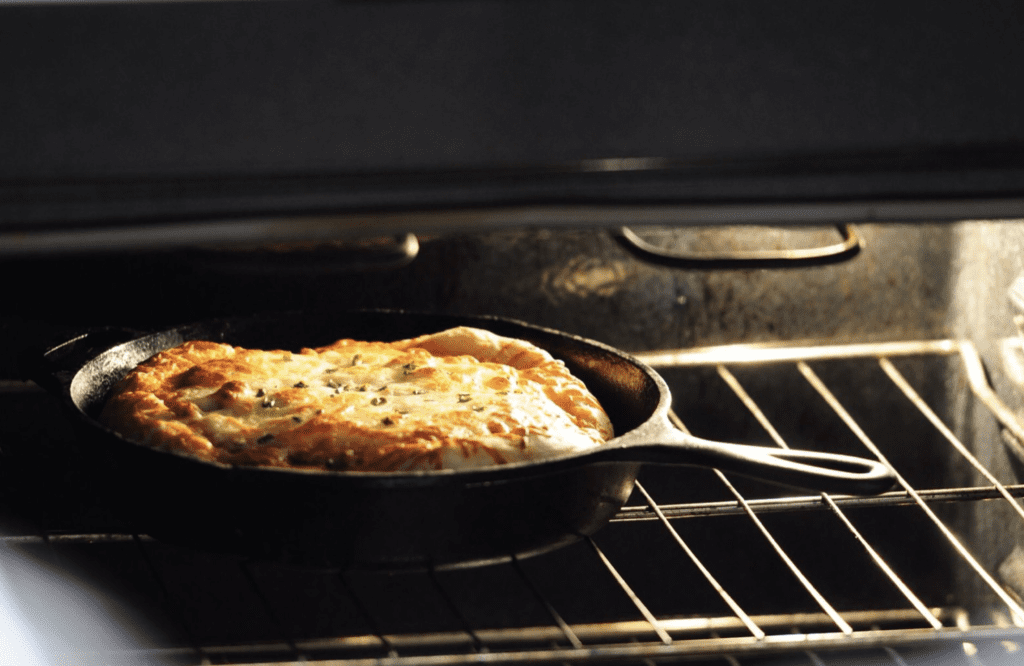 Carefully lift it up and place it on a flat surface. You can sprinkle some red chili flakes on the pizza if you want it to go a little bit spicier. Slice and serve!

1. This recipe can be altered by using thinly-sliced pieces of meat. You can go longer for them to cook or pre-cook the meat on a cast-iron skillet before putting them in the oven.

2. Always use safety precautions. Since you are going to put the pizza into the microwave oven by hand, always use kitchen mitts or safety gloves to prevent burns on your hands.

Since microwave ovens are commonly used for reheating food, it is also great that this recipe can be stored in the refrigerator for up to 4 days.

You can just get a slice later on and then preheat it in the microwave when you want something to eat. The re-heating period should only take 2 or 3 minutes.

Use a Browning Plate

We figured that a browning plate is not that common for people who do not make pizzas in their homes too often. That is why we used a baking dish in this recipe to make up for it.

However, we still think that when cooking a pizza in a microwave oven, it is best to use a browning plate to achieve that little char on the pizza crust when it is cooked.

So when you have a browning plate, spray or brush it with a very thin layer of oil and then let it preheat in the microwave for at least 2 minutes.

After two minutes, get the browning plate out of the oven and then place the pizza in it. Return it to the microwave oven and then let one side cook for 3 to 4 minutes.

After that, get the browning plate out of the microwave and then flip the pizza dough over with a spatula. From there, you can put the toppings over the cooked side of the dough and return it to the microwave oven.

Let it cook for another 5 to 8 minutes and the pizza would be ready with a beautiful crust, all crispy and crunchy plus some nicely-cooked toppings over it.

When you use vegetables as toppings, you should wash them with water and then cut them thinly. This is to make sure that they are cooked perfectly in the microwave oven.

Another way to make sure that the toppings will be cooked in the microwave oven is to pat them with paper towels before placing them on top of the pizza dough.

This will lower the moisture content of the pizza and so it will cook faster. When you precook meat as toppings, make sure to also remove the excess grease on them.

For the cheese, we recommend buying high-quality artisanal mozzarella since they are drier than the common mozzarella cheese that is sold in bulks.

So if the question that you want to answer is about the length of time that you need to cook a pizza in a microwave oven, then it will depend on the plate that you use.

It will also depend on the toppings so when you make pizza in a microwave oven, just make sure that it reaches around 400 degrees Fahrenheit and it will be cooked in less than 20 minutes.

Pizza is a really great meal and it can be cooked in various ways. So if you do not have a powerful oven and only a microwave oven in the house, then cook the pizza longer.

20 minutes under 200 degrees Celsius heat will be enough to make the crust of the pizza crispy and puffy so that it becomes chewy on the inside.

But when you are in a hurry, we suggest that you use a browning plate so you still get that brown color on the crust by letting it cook for less than 10 minutes.

Either way, we suggest that you follow the recipe above so you can make the best pizza in a microwave oven. Homemade pizza will always be better than frozen pizza so in any way that you can, make it at home!