Making a Naan Bread inside a pizza oven is going to be the easiest thing to do as the pizza oven tends to get extremely hot which is the perfect condition needed to cook a naan bread.

Naan is cooked at really hot temperatures and if you have an oven that could reach temperatures like 932F like the Ooni Pizza Ovens then you are definitely going to be impressed with the results that you can get with cooking Naan inside a pizza oven. 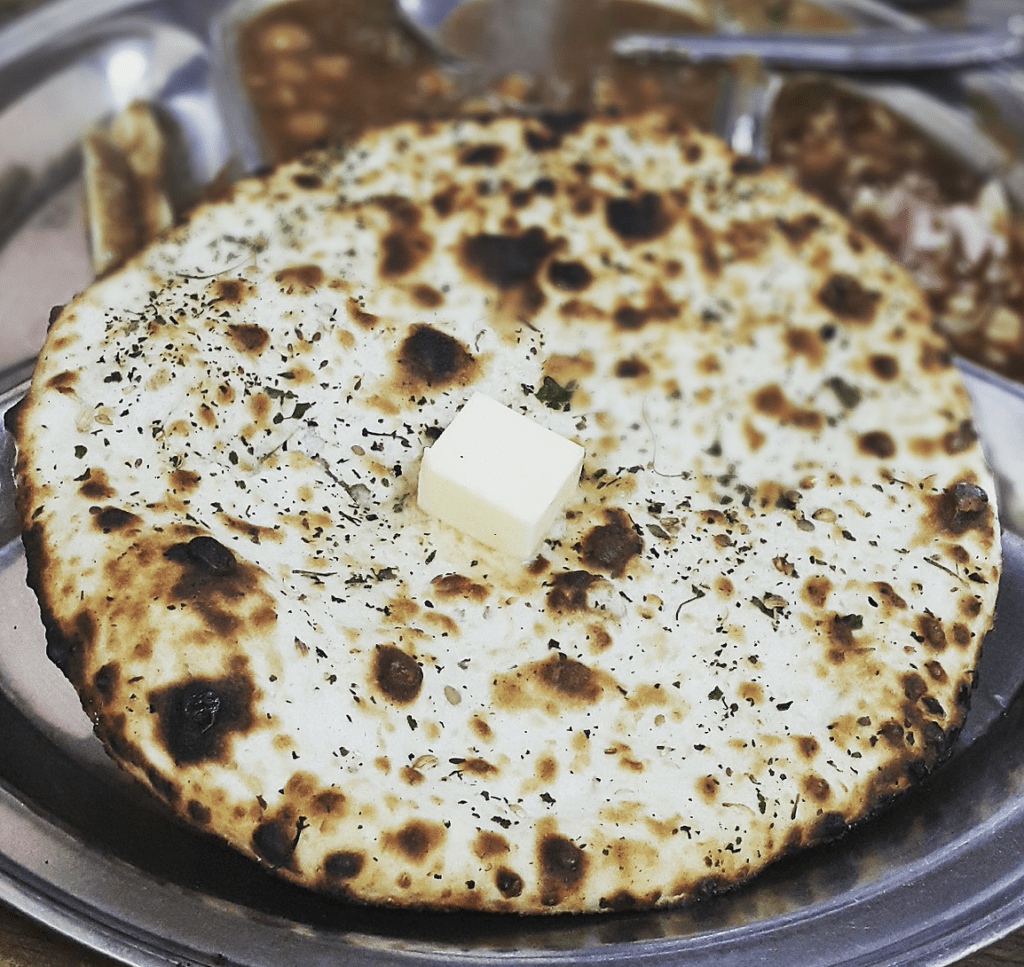 So, if you are in love with this Indian bread and want to get the exact recipes on how it is made then continue reading the post. Just so you know, one can even make a Naan bread on a pan but it just doesn’t get that taste and fluffiness that you get in a hot oven.

If you have tried different kinds of Naan then you would know that there is Butter Naan and Garlic Naan as well and we would discuss how you can make them as well.

So, without wasting any more time, let’s dive into some cooking-

Now let’s look into the simple recipe of making it-

3. Salt as per taste

1. Add all the dry ingredients in a bowl.

2. Now, use milk and knead the dough. We use milk so that you can a richer taste in the Naan but if you like then you could go with plain water as well.

3. Now, knead the dough well until it is nice and soft.

4. Now, you need to roll out the dough like you would do with pizzas and cook it inside your pizza oven. Make sure to coat the top of your Naan with some butter and coriander leaves in order to get an amazing taste.

This is by far the easiest way you can make Naan and you are going to love the taste of the Naan cooked this way. You can eat this with a curry or some dip of your choice.

Now, making butter Naan requires a bit more skill than you would usually need with a normal Naan. You need to roll out the dough and then make small folds and stack them on top of each other till you get a thin pipe-like structure.

Now, you need to roll the stack inwards and make a small ball. You could see this in the video below to understand the process better.

Once you are done with this, you get a small ball. You need to then roll out this ball and cook it inside the pizza oven till you see your Naan is cooked well with a few charred spots on it.

Butter Naan tastes even better because of all the layers that you find on it and you should definitely try eating it with a curry or some veggies and a dip.

You can even treat it like a taco and fill up some nice roasted vegetable mix along with sauces of your choice.

Another way of making Naan is by using Yeast. if you want your Naan bread to be all fluffy and have a bread-like texture then you can go with this recipe as well.

Although the traditional way of making Naan is the one we discussed above and Yeast is never used in the making but if you like this kind of bread then why not give this one a try as well.

Using Yeast makes the bread really nice and fluffy and you are going to enjoy the taste of it because of all the other ingredients in it.

Note- I refrain from calling this Naan because it is not how traditionally Naan is made, the recipe discussed above is how Naan is made and that is how a Naan should look!

This one seems like a modification in the recipe to make the naan taste like bread but if this is something you would prefer then you can go ahead and try this one out and let us know how you like it!

– Salt as per taste

1.  Mix all the dry ingredients in a bowl.

2. Once you are done with that, you need to add some Yogurt in the bowl which would help you to knead the dough.

Most of the time, I usually eyeball the quantity and you should be able to do the same, just add yogurt slowly and keep mixing so you know when to stop.

3. Knead the dough till you get a soft dough ball. Now keep the dough aside so that it can rise and become double its size.

4. Roll out the dough in the shape of a Naan using a rolling pin and cook it inside the pizza oven.

Cooking Naan inside a pizza oven

The woody and smoky flavor from a pizza oven is what makes cooking a Naan inside a pizza oven even more appetizing. Although there are people who like the taste of Naan made with yeast but traditionally it is made with baking powder and yogurt.

Naan has a nice crispy taste to it and it is supposed to be one of the famous Indian Flatbreads. Of course, Like everything else, it did get a transformation in the west but if you are looking to make some authentic Indian Flatbreads then try avoiding yeast.

The Naan tastes best with a curry or you could even eat it with a dip of your choice. However, the slightly burnt smoky flavor of the Naan is best achieved inside a pizza oven and it is very easy to cook it in the oven.

One of the major advantages of cooking it inside a pizza oven has to be that you can cook multiple Naans within a few minutes and you can serve a lot of people or guests at once.

This is one of the reasons I love making Naan inside an Ooni Pizza Oven because that way I could cook 10-20 of them within 5-10 minutes depending on how hot is the pizza oven.

You need to keep an eye on your Naan though and you cannot leave it inside the oven to cook on its own. This is due to the fact that it takes very little time for Naan to cook and get ready. Hence make sure that you do not leave the Naan unsupervised.

I hope all the above tips help you make an amazing Naan inside your pizza oven!