As we have mentioned in our other posts, Ooni is the best at making portable pizza ovens, but the competition is within their company. Hence, this comparison of Ooni Fyra and Roccbox pizza oven.

Ooni Fyra is the newest addition to Ooni’s original pizza oven line. It was released in the middle of April 2020.

It has new features that set it apart from other Ooni products. So far, it has received praise from Ooni fans and those pizza lovers who know about Ooni.

The Roccbox Pizza Oven is a heavy oven that comes in with dual fuel attachments for more performance-based features.

Gozney has produced this pizza oven based on the classic wood-fired brick ovens. That justifies its weight since it also uses the same components to create the heat needed to cook pizzas.

Both of these ovens can produce an amazing Neapolitan-style Pizza as they provide the right amount of heat to make crispy crusts on pizzas in a small amount of time.

If you are a pizza lover and you want to cook your pizza in the comforts of your own home, then these two will give you a satisfying finish – even better than the ones you order for delivery.

In this post, you will see the main differences between the two and the similarities that make these pizza ovens amazing.

So let’s get started!

What’s In The Box?

3. The Ooni Fyra’s Manual and Essential Guide that contains Tips and Recipes.

1. The Roccbox Portable Outdoor Pizza Oven with a built-in thermometer.

2. A Gas fuel attachment with a gas regulator and a hose.

Design of the Pizza Ovens

Ooni Fyra did not go far away from the classic Ooni patented design. It has sleeker edges than most of its predecessors, but the built is still the same.

The Roccbox, on the other hand, looks like a miniature brick oven. If the goal of Gozney is to do that, then they have certainly succeeded.

The main difference between the two that you will see right away is the color. The Ooni Fyra boasts a more simplistic black and silver finish, while the Roccbox has a green-coated shell.

Roccbox also has a gray and silver finish that makes it look like the Ooni Fyra, but it is not common to customers.

The shell of the Ooni Fyra is designed to let the heat inside while the Roccbox has very thick insulation to do that.

So you will see that the interior and opening of the Ooni Fyra is a lot wider while Roccbox only seems to allow a pizza peel and the pizza itself to enter the oven because of its thickness.

A little on the Design Ooni Fyra…

The Ooni Fyra also boasts a detachable chimney and a pellet hopper that stands out when you look at the oven. The Roccbox has a simple look with no protruding elements apart from the fuel attachments on its back.

Both ovens have foldable legs, although the Roccbox has longer legs. But do not get fooled; its portability is still there since the legs fold completely.

The air vents are also very different between these two ovens. The Ooni Fyra has a vent at the back that detaches from the pellet hopper.

It means that the fuel attachment of the Ooni Fyra does not directly suck air in; it only holds fuel.

The Roccbox Pizza Oven has fuel attachments that both have vents installed in them. The attachments hang at the oven’s back and gather air from between the oven and the tabletop.

Here, you will immediately see that the ovens’ weights are very much far from one another. The Ooni is light, while the Roccbox is massive.

The Ooni Fyra only weighs around 10 kilograms or 22 pounds, while the Roccbox Pizza Oven is over 20 kilograms or a little over 44 pounds.

Carrying the Ooni Fyra is much easier than carrying the Roccbox. However, the Roccbox Pizza Oven’s weight is still manageable and can be moved by hand to short distances.

Since both are portable, you can both bring them on trips if you have a car. You can easily set up both ovens wherever you want because of their small size.

The finishes on the oven shells are both resistant to weather. The Ooni Fyra has a powder-coated finish, while the Roccbox Pizza Oven has a silicone cover for retaining heat.

Both ovens can go very hot in a matter of minutes, so make sure that you avoid touching the roofs or the shells of either oven because they can get hot.

A bit on the features of Roccbox…

The stainless steel on the Roccbox is a bit of a downside since it gathers soot when exposed to fire, especially when using wood as fuel.

The Ooni Fyra avoids this by having that amazing chimney, and since it uses wood pellets as fuel, the smoke goes up directly to avoid the front of the oven, making it look clean as always.

The Roccbox has a stone cooking surface secured in place, so you need to trust the firepower to clean the stone, and usually, the heat does clean the stone.

You should not worry about the stone slipping out of the oven since it is heavy and secured inside the Roccbox.

It can cook up to 12 inches of pizza, which is common between these two ovens. They can handle a few more inches, but it would be difficult for you to reposition the pizza once inside.

The Ooni Fyra has a great baking stone made out of cordierite, and it can retain heat for a long time.

You can remove the stone out of the oven; you can flip it so that one side is cooking while the other is self-cleaning.

The heat that both ovens produce allows it to clean the interiors by way of pyrolyzing. It burns all the residues left inside the ovens, so you do not need water for cleaning.

Merely scrubbing the rest of the food that got stuck inside the ovens, you clean the entire interior without the help of tools and other chemicals.

The Ooni Fyra is undeniably the better player when it comes to airflow. The vent at its back allows air to circulate inside and goes out of the chimney.

Then, the air circulates inside the oven and goes out of the door. If you use wood as fuel, the smoke will render the pizza an Amazing smoky flavor.

The other features of the Ooni Fyra are the door with a one-inch peephole and glass-reinforced nylons as a handle for a cool-to-touch experience, even if the oven is piping hot inside.

It also has a controlled airflow feature where you can limit the air that comes out of the oven with just a simple turn of a lever on the side of the chimney.

Both ovens can reach 932 degrees Fahrenheit or 500 degrees Celsius, so they can cook authentic Neapolitan-style Pizzas in just 60 seconds.

They do not reach that heat at the same time, though. The Ooni Fyra takes about 15 minutes to reach that temperature with wood pellets.

The Roccbox needs 30 minutes to heat up to that temperature when you use gas as fuel. Wood will take a longer time to reach that heat.

The type of wood also limits the wood used in the Roccbox Pizza Oven. I recommend using hardwood to make the oven heat up properly.

The ovens’ baking stones are great in retaining heat, and you can cook more pizzas even after the fire is out. It may take a little longer, but eventually, they still produce great pizzas.

The Ooni Fyra is a very small oven, yet it packs a lot of power for its size. You would expect the Roccbox to heat up with a high temperature since it is a well-insulated oven.

Both ovens can easily cook a 12-inch pizza, and you will have enough room to move the pizza around. Since both pizza ovens are powerful, you will need to attend to them regularly. 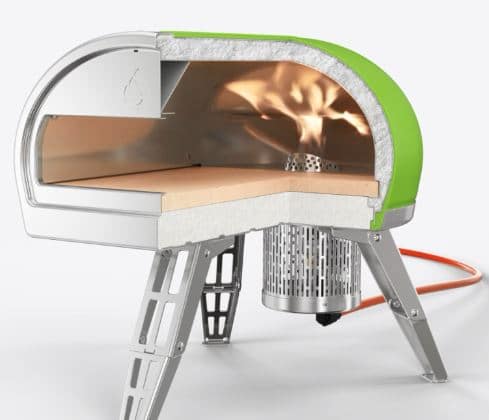 Cooking in the Ovens

The Roccbox is a little hard to cook other recipes with. If you have big cookware that you need to cook a recipe in, do not expect it to fit in the oven.

The opening of the oven is small, as well as the interior. This small space inside the oven is what makes the heat retaining capability very great.

The interior heats up to very great temperatures, and tracking down the temperature is easy because of the built-in thermometer.

Controlling the temperature is also easy, especially when you are using gas as fuel. Adjusting the amount of wood you put in when you use the wood fuel attachment also controls the temperature.

The Roccbox has a built-in thermometer that can accurately tell you the temperature inside the oven.

It is also easy to read since the temperatures are marked with color, red being the hottest and blue for the coldest or without fire.

==> Get the Roccbox Pizza Oven

As for the Ooni Fyra, you can get up to 13 inches of pizza, but the space left for moving the pizza around is very little. You will find it easiest if you cook 12-inch or 10-inch pizzas in it.

It is a very powerful pizza oven that is the most fuel-efficient so far. A filled pellet hopper can take you up to 20 minutes of cooking time without reducing the heat.

With the power that the Ooni Fyra produces, plus the insulation and the airflow control, you can even cook pizzas in just 45 seconds.

However, you will need to turn the pizza around every 10 seconds to avoid burns on your pizza. The pizzas that it produces have a very crispy crust and a chewy inside.

The dough that both pizza ovens produce cooked evenly and properly preheated is only a small possibility that the dough will stick on the baking stones.

The Ooni Fyra is an amazing upgrade on the Ooni 3. This wood pellet pizza oven can cook pizzas under 60 seconds, which is nothing but a miracle.

Ooni has brought to us one of the best pizza ovens that we out there, and you just can not go wrong with the Ooni Fyra. If you are interested in getting the Roccbox like pizza oven from Ooni, then you could go for the Ooni Pro at the same price.

The Roccbox Pizza Oven is multi-fueled, unlike the Ooni Fyra, which is just fueled by wood pellets. You get both the wood burner and the gas burner, along with some much-needed accessories.

==> Get the Best Deals on the Ooni Fyra

The Ooni Pizza ovens, in my opinion, are way better than Roccbox, and hence I would go with Ooni Pizza Ovens any day. Check out both the ovens, and let us know what you think in the comments below!