So, I recently thought of going Vegan and while that is still an ongoing process looking out for Vegan alternatives for Dairy cheese has been really difficult. After looking for some alternatives I came across Vegan Cheese from Live Yum.

For all those who are new to this, Live Yum is a vegan cheese brand in India and if you are Vegan then you might have heard of it or if you are reading the post then you want to know if this cheese is good or not?

I tried their Mozarella Cheese which claims to be gooey like dairy cheese and it melts when you cook it on top of your pizza. All the claims were pretty interesting and I wanted to try out this Vegan cheese ASAP. 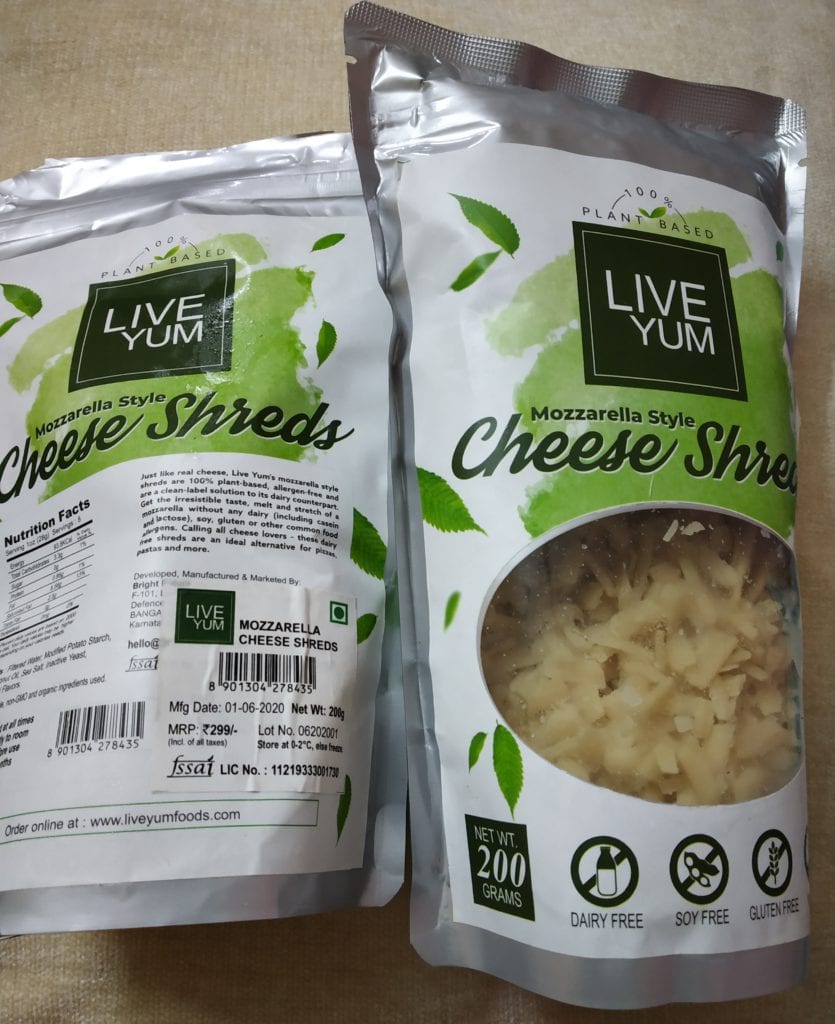 At this point, I have not had dairy cheese for quite some time and any kind of alternative for it would be appreciated.

Although, I have tried making Vegan cheese at home and I have been successful at doing so but the fact that I could get readymade Vegan cheese online was just interesting and hence I had to try out this brand.

So, I got all excited like any other online shopper and brought two packs of Mozarella cheese thinking that it might be good. Let’s be honest, I got influenced by all the positive reviews of the cheese that I had seen online.

I got mine from VeganDukan.com and you can get Live Yum cheese on Amazon as well. So you can go ahead and

So when I got the Vegan cheese at home, I was extremely excited, and soon after I sanitized the packets and the box in which it came,  I opened up my first pack.

Now, when I smelt the cheese, it smelt like coconut oil and it was just disgusting. Now, I love coconut oil and coconut flavor, it is probably one of the best things in the world but the kind of ingredients used in this cheese just made it smell worse.

There were some ingredients in this mix that made it almost impossible to eat the cheese. So, I thought of giving it another chance and tried to work it with some rice flour-based tortillas. 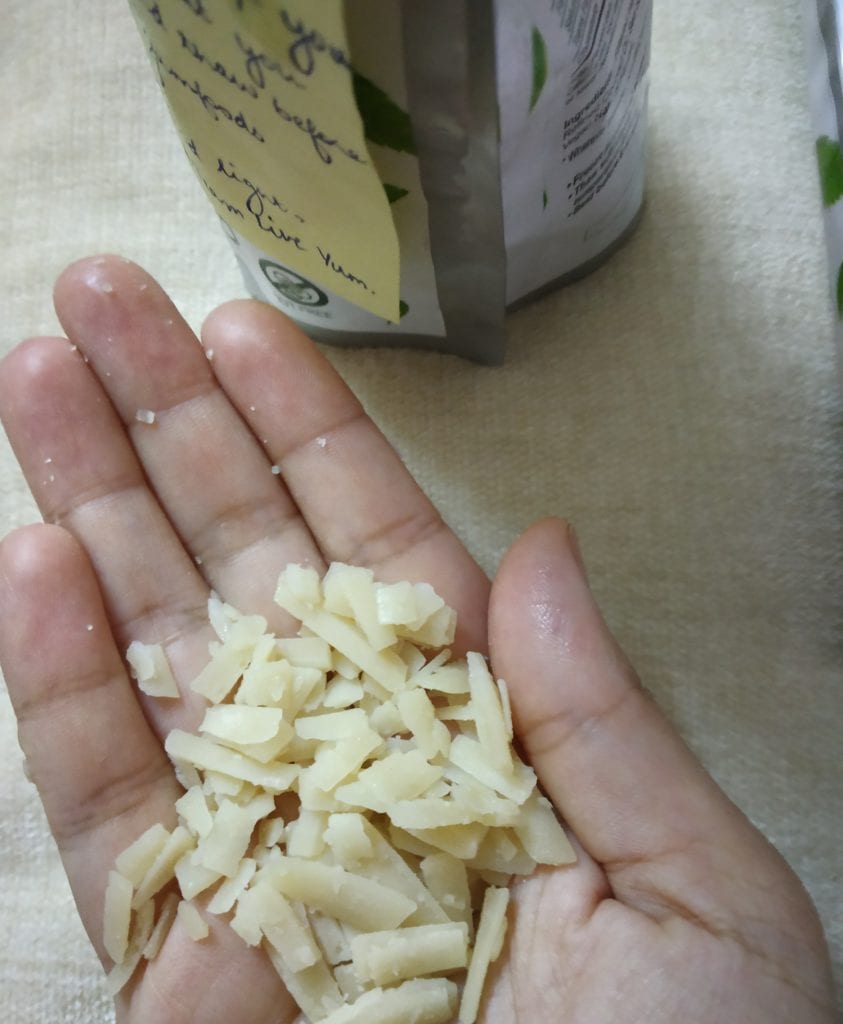 I tried to melt the cheese and it was not at all stringy, and it was gooey but in a very disgusting way. It tasted extremely bad and you cannot eat a lot of it.

It was like this yellow gel and you are not going to enjoy it especially if your taste buds are still alive! It has a very weird taste and you never know how healthy it is going to be!

I think it made me sick because of the taste and I would rather eat dairy cheese and face the consequences.

Going Vegan is amazing but Live Yum cheese is definitely not something I’m willing to invest my time and energy into. The product felt like a waste of money and since I have bought two packets I seriously do not know what I would do with them. 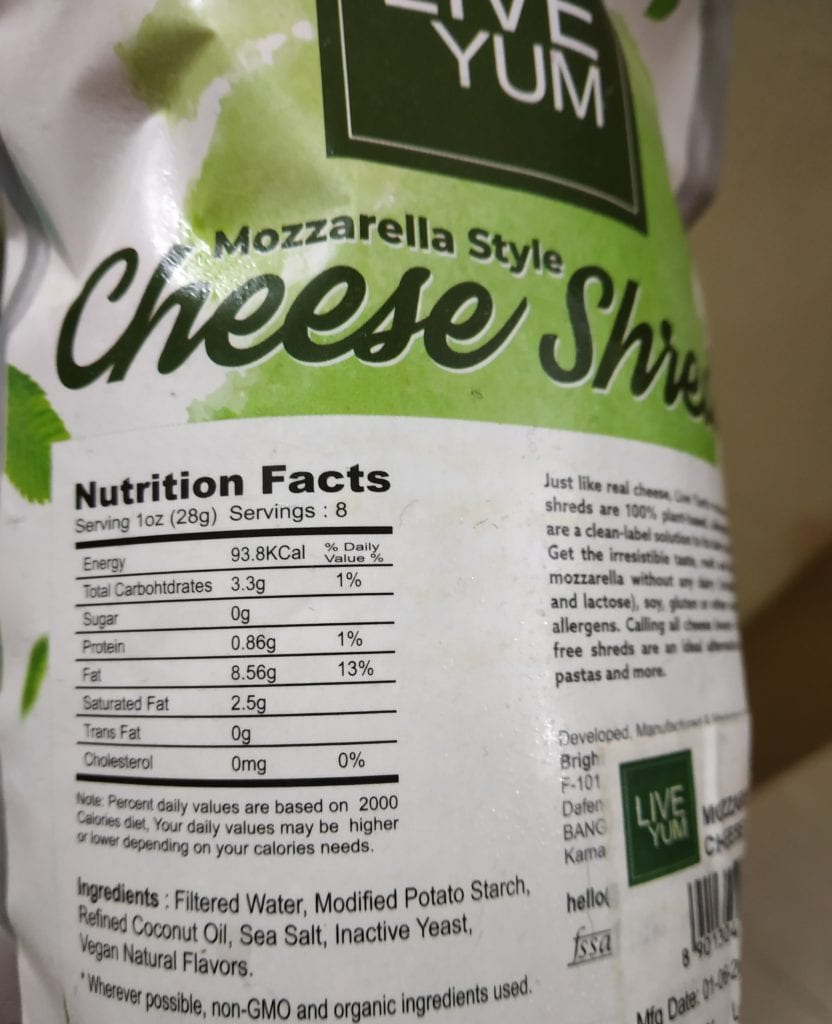 I do not think you should invest in Live Yum cheese as they do not taste good whatsoever. I would insert a few pictures on how the cheese melts and it is really not a good sight.

Save your money and rather make some vegan cheese at home as even that would taste better than the ones that you currently get in the Indian market.

It is easy to make Vegan cheese and I have mentioned some recipes on this blog and it has worked out perfectly for me and if you follow the recipe you are going to get the exact same results.

I’m still on the lookout for the best Vegan cheese in India and I would keep you all updated on this since as of now, there aren’t any good options out there.

So, try some homemade recipes until we have a real Vegan alternative to Dairy cheese in the Indian supermarket.

If you are lactose intolerant and have found out a cheese that really tastes close to dairy cheese then let me know about it in the comments below!