Char-broil has done it again with their 6 burner gas grill. This grill by Char-broil is a whopping 650-square inch grill that allows you to cook different recipes at the same time. It is one of the largest burners in the market for its price.

This is not their highest-priced models but it performs just as well. It is made with cheaper materials that incredibly does the job.

I felt the grill could be used even as a pizza oven with the right pizza stone. Hence this topic piqued my interest.

There are a lot of grills that can help you make pizzas and give you the desired results that you desire.

This grill is perfect for family reunions or company gatherings. This grill lets you cook a lot of recipes, all at the same time. It can handle 35 burgers while allowing another 10 rest on the side, keeping them warm.

It is an improved version of the Char-broil Performance 475. It has a larger area for cooking and a more powerful burner. This grill makes sure that you will never run out of space.

Char-broil has 10 different series of gas grills currently in the market. Whatever you choose, you will surely not be disappointed. However, let us talk about how well the Performance 650 6 burner gas grill performs in case you are leaning more towards this product.

Char-broil has given us a huge grill. This amazing 6-burner grill comes in with a stainless steel body. Along with this is the metal side shelf. 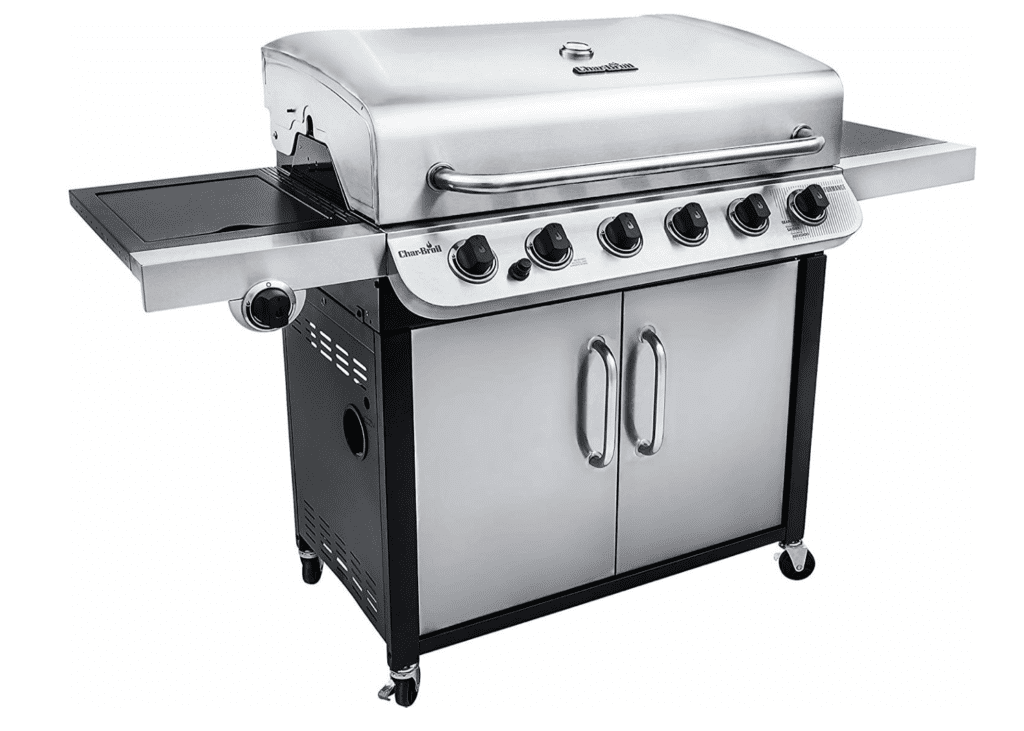 It weighs at around 130 pounds out of the box. This may mean that the metal used in the grill is cheaper, although it does not perform above standards.

It is lighter than other burners in the market, but it is reasonable for its price.

It has a side shelf where you can put food on, and the grill has a lid where the thermometer is placed.

Some people may find this as a downside. There are customers that prefer to see the temperature when the grill is open, but this is not much of a loss.

The Performance 650 also includes a swing-away warmer rack. It is totally removable or you can simply swing it up to its lid. This is the same design that was introduced with the Char-broil Performance 475.

This means that you can cook 35 burgers while resting another 15 on the side and keeping them warm as well.

==> Get the Best Deals on this GRILL NOW!

The grates on this grill are also the same as the Performance 475. The grates are porcelain-coated so you will not have any problem with food sticking on them. This also makes the grates rust-resistant.

They are also excellent at distributing heat. They heat up easily and distribute the heat evenly. This will make your steaks cook perfectly without having a medium rare on one part and a well done on the other.

Also, because of the porcelain coating, you can be confident that there will be no burn marks left on the grill. 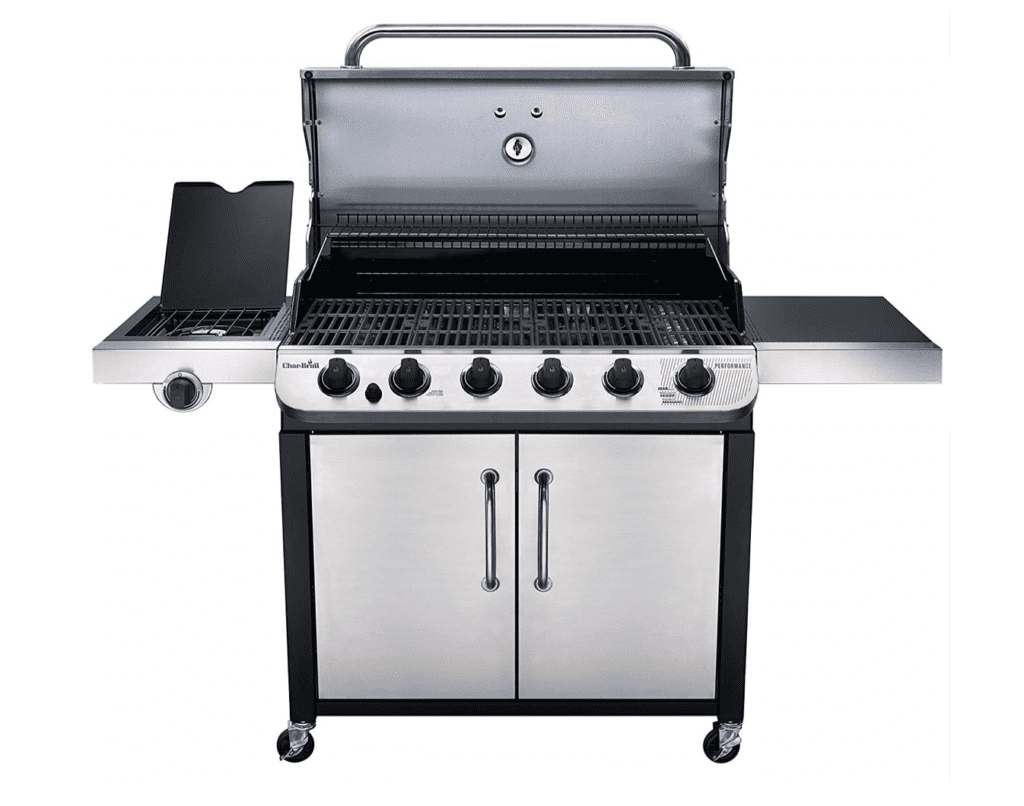 The grill also comes with a side burner. It can be used to make gravy or sauce.

However, Char-broil has upped its ante by putting a more powerful burner with 10,000 BTU.

With this amount of power, you can easily cook your gravy and use it for cooking or boiling almost anything.

You can use the side burners to cook whatever recipe you want with the assistance of a pan.

This is basically the sixth burner which allows you to cook tomatoes or bell peppers or even sear your steak with.

This is an additional burner that totally justifies its price if not exceed it. The storage of Performance 650 is definitely improved.

It sits right below the primary burner so it is basically a 650 square inch storage.

The propane tank that is used for the burner is also hidden away.

Some customers find this feature better than the past grills by Char-broil.

Because of its enormous 650 square inches primary burner, it can cook a lot on it. You never run out of space with this burner. It can cook 35 burgers or at least 20 steaks simultaneously.

Electric ignition. Char-broil has been using this feature ever since. You can find electric ignition on the Performance 475 and on this burner as well.

Char-broil has been very great at designing their electric ignition. It helps the burner ignite and heat up to a very high temperature in no time.

There are 6 burners that all emit their flames from the top and heats up the grill evenly. So no matter where you want to cook, you can be sure that the food will be cooked evenly.

But heat is not the only great thing about this burner. The Performance 475 had trouble heating up and retaining the heat. This is because it did not have enough BTU for its size. 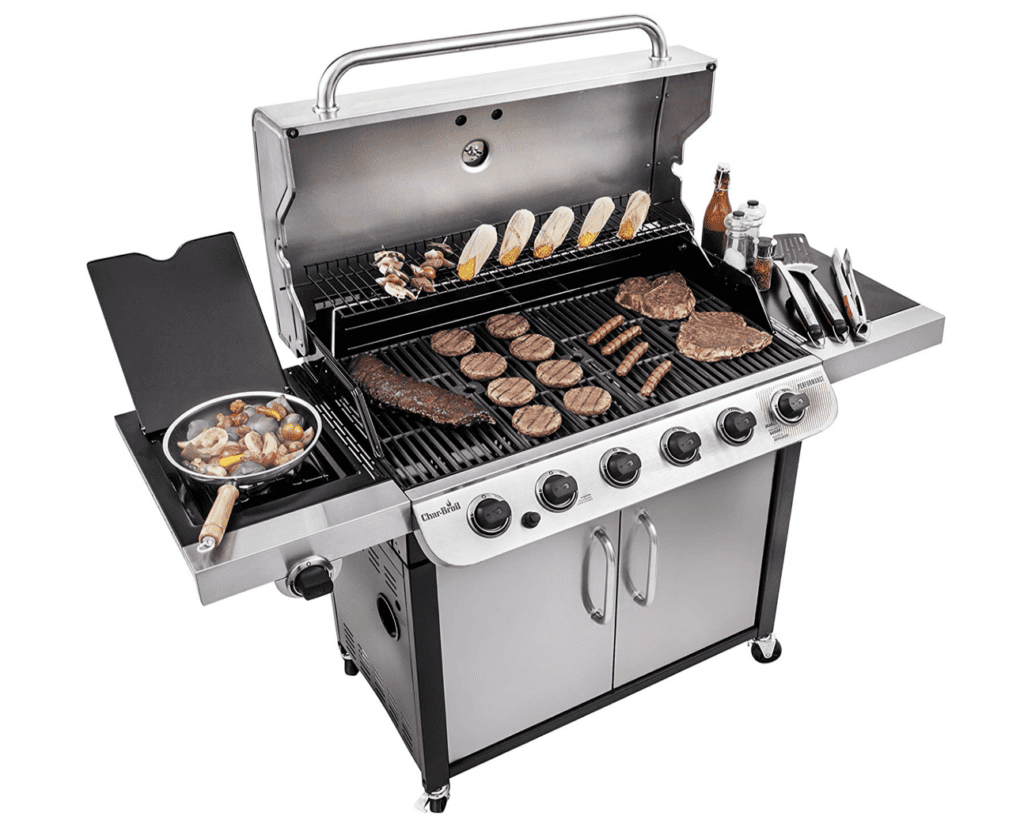 The Performance made up to that and Char-broil learned its lesson. It has a 60,000 BTU that properly disperses the heat evenly through the entire burner. The Char-broil Performance 650 6 burner gas grill heats up very fast and retains the heat for as long as you need.

Aside from the hamburger and steak, you can also cook a variety of foods in the burner. You can roast your potatoes on the grill as well as sear your vegetables on it.

You can cook chicken and hotdogs on the grill, basically everything that you want to go with your mains. Although these recipes require different temperatures to cook with, Performance 650 is perfect for it as it has different features that are great for different food.

The two-door cabinet storage is large enough for you to store whatever you need when using the grill. So you do not have to go back inside the house every now and then to get what you need.

You can store all your grilling tools in it after washing them and they are ready for the net use.

The Char-broil Performance 650 6 Burner Gas Grill weighs out of the box at around 130 pounds. It is easy to assemble and only takes two people for it to assemble. Two persons can assemble the grill in or less than an hour.

It comes with detailed instructions for you to assemble the grill with ease. The guide includes a step-by-step process in assembling the grill.

The primary 650 square inches grill sits on top of the storage and stands at 18.5 inches. The side burner and the sear burners are placed on the side and look like the ears of the grills. The lid, as mentioned above has the thermometer and has a handle that goes across the entire lid. 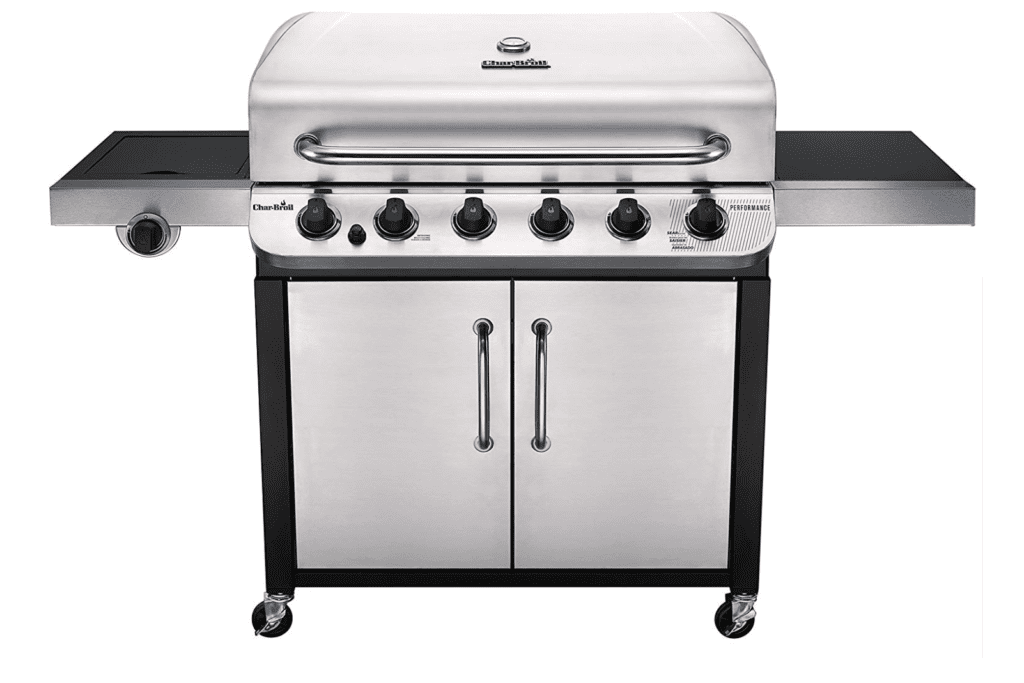 Since Performance 650 is made out of stainless steel, the outside is easy to clean. You can take a towel and wipe off the oils that went off of the grill.

When it comes to the inside since the grill is coated with porcelain, you can easily wipe it with a towel as well. You can also slide the pan under the burners and hose it down every once in a while.

The grease trap is also removable which makes it easier to clean as well.

The first that I saw in the Char-broil Performance 650 6 Burner Gas Grill is that the thermometer is placed on the lid. This means that you need to close the grill first to know the temperature.

Some customers prefer to have the thermometer where they can see it even when the lid is open.

The Performance 650 had a hard time cooking steaks on its primary grill when the lid is open but it does the job. This grill is not a high-end grill but it is okay since it is worth the price tag and has most of the features you would need in a grill.

I would definitely recommend the Char-broil Performance 650 6 Burner Gas Grill for you. This is a great product. Although Char-broil has opted for cheaper materials in terms of the ones used for the grill, it makes up for the performance that it gives you.

This grill is a huge improvement from Performance 475. They have improved the ratio of the number of BTUs to an almost perfect proportion. See the Performance 475 had a BTU that was way lower than the required BTU for its size.

The size of it will not disappoint you for sure. It has a 650 square inches of primary grill along with two side burners. You can cook for that family reunion and company outings that require a lot of food.

==> Get the Best Deal on this GRILL NOW!

Cooking food for a large number of guests might give you a hard time but the Performance 650 lightens the load by allowing you to cook different recipes, all at the same time.

Overall, the Char-broil Performance 650 6 Burner Gas Grill is a very great product. It has some issues but it can totally make up for it.

The BTU is still a little bit low and can still improve but it does not have a great factor when you are cooking. The material used for the Performance 650 can also be changed to a higher quality stainless metal but the price of the product will also be undeniably higher if that is to happen.

The Performance 650 is not a high-end grill but it acts so well beyond its price. Its functionality is way better than the other grills in the market with the same price range.

Char-broil has been a great innovator of grills in the market and they have continued improving their products at a high level.

They certainly do not disappoint and if you ever come across at Amazon while looking for grills, make sure to look at their other 10 different grill series which, just like the Performance 650, do their functions and justify their prices.

Check out the grill and let us know what you think in the comments below!