Technological advancement has invaded most parts of our lives and the kitchen is one of the many areas that technology has been a part of.

However, it is quite surprising that one of the most essential tools especially in baking is still stuck on very low-technology equipment. That is the Pizza Stone (also called baking stone).

Baking stones are usually made out of pure ceramic or cordierite stone mainly because of their ability to absorb and retain high temperatures that can be used for baking.

The ovens that most manufacturers produce right now are not as powerful as the brick ovens that are used to make crispy crusts on whatever you are baking.

Pizza Stones help mimic the heat that a brick oven produces to create an amazing crust on the recipe that you are cooking in an advanced oven.

Baking bread looks like a very simple job and indeed it is, but not all results are as satisfying as those that were done right. 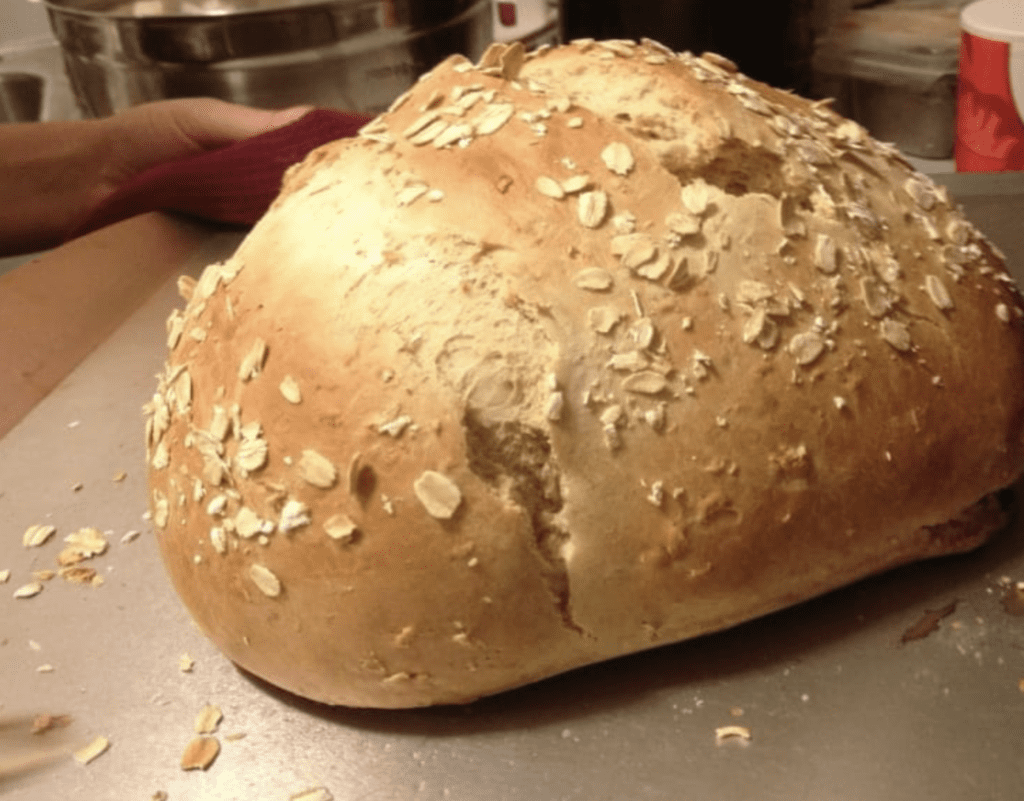 Bread with many loose holes are considered the best ones and oftentimes mean that they were baked in a high-temperature oven with great heat retention and radiation inside it.

Having that so-called oven spring is not easy in the modern ovens. With the help of a pizza stone that heats up very quickly and the direct contact of the bread on it makes the crispy crust.

The oven spring also allows the bread to rise quickly during the first minutes of baking. It makes the fermentation inside the bread faster, therefore, creating bubbles hence the holes on the bread.

A preheated stone allows this to happen by gathering the most heat it can get from the oven and then immediately transferring the heat to the dough for it to rise quickly.

What makes a Pizza Stone Special?

Pizza stones come in different shapes and sizes. Most are circular for the pizzas with – well obviously – the round shape.

They can also be bought as rectangular in shape and they have different thicknesses as well. This makes arranging small recipes such as cookies easier.

They are also cheaper than the brick ovens that produce the crispy crust. Pizza stones usually cost a few dollars and they can create that amazing crust just as good as the brick oven.

Things to Consider when Baking Bread on a Pizza Stone…

As mentioned above, the Pizza Stone needs heat to transfer to the dough so never put a cold dough on a pizza stone and then into a hot oven.

You should always put a pizza stone on a cold oven and then preheat it. This is to avoid the thermal shock that may cause cracks and even breakage on the pizza stone.

Getting the pizza stone as hot as possible before placing the dough on it is important for it to transfer as much heat as it can and bake the bread perfectly.

Consider some aspects of the stone. The larger and the thicker the pizza stone is, the more heat and time it will need for it to properly preheat.

The amount of time for preheating largely depends on the thickness of the pizza stone. The standard heat that can be used for preheating is 500 degrees Fahrenheit.

Scoring means slashing the bread dough on the top with a knife so that it cooks better.

Scoring the bread allows it to expand as big as it can during baking. Leaving scores on the bread will give space for the bubbles to go out and the bread to actually rise.

Using a powerful brick oven or a pizza stone that produces high heat and that oven spring requires deeper scores on your dough so it can rise well and not leave you with a flat surface.

The scores should open up when baked and not just widen. See the difference is that a shallow score will only let the bread rise and the bubbles not getting out.

The deeper the score, the better the result. Using a pizza stone when baking bread means that there is a powerful heta in play and that the bread should rise, so the deep scores should help.

You can use a pizza peel when you transfer the dough onto the pizza stone. A pizza peel is a large shovel-like tool that is usually used to carry a pizza to and from the oven.

You can use this to transfer your dough properly in the oven. But there are some steps that you should do before just shoving the dough on the pizza peel and into the oven.

This may take some time practicing but so do not expect to perfectly place the dough at the center of the pizza stone on the first try.

If ever you got the dough far from the center of the pizza stone, do not worry, and do not move it until the crust is cooked enough to prevent destroying the shape of the dough.

This should allow you to place the dough on the center of the pizza stone is you really want it to be in the center. You can then remove the parchment paper after the crust has hardened. 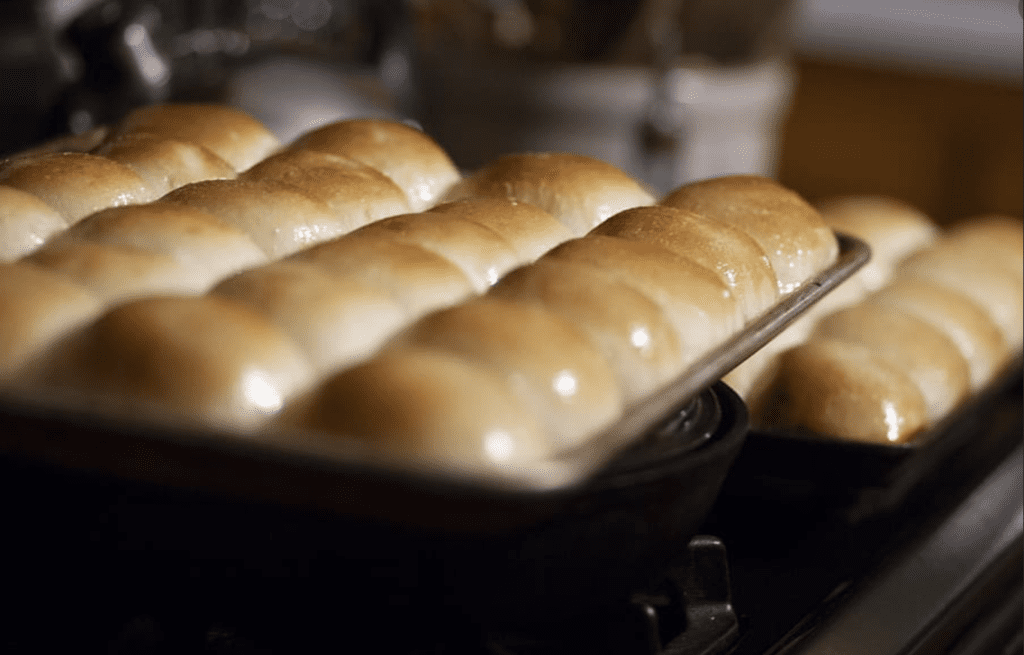 There is a proper way of preparing and baking a sourdough bread compared to regular bread.

Regular bread uses wheat and with the help of yeast, the bread rises. On the other hand, sourdough bread uses rye and requires a starter dough for the bread to rise.

A starter dough consists of a combination of both natural and wild yeast and a bacteria called lactobacilli which is developed from a fermented dough.

The starter dough is also what brings the sour flavor of the bread. A starter is basically a dough that is very concentrated that only a teaspoon of it contains millions of yeast and billions of lactobacilli.

Sourdough bread is a low-moisture recipe meaning there is not much water inside to let it rise during baking and so you might need to adjust a little bit on that.

Because of the lack of moisture, you need to let you sourdough bread rise for longer periods of time before baking it.

Usually, it takes up to 12 hours in order to make a sourdough bread rise and you also need to make a second rising procedure under low heat.

If you go too much with the rising however, the inside of the sourdough bread will have exhausted all the rising power and it will not be as good as you would have expected. 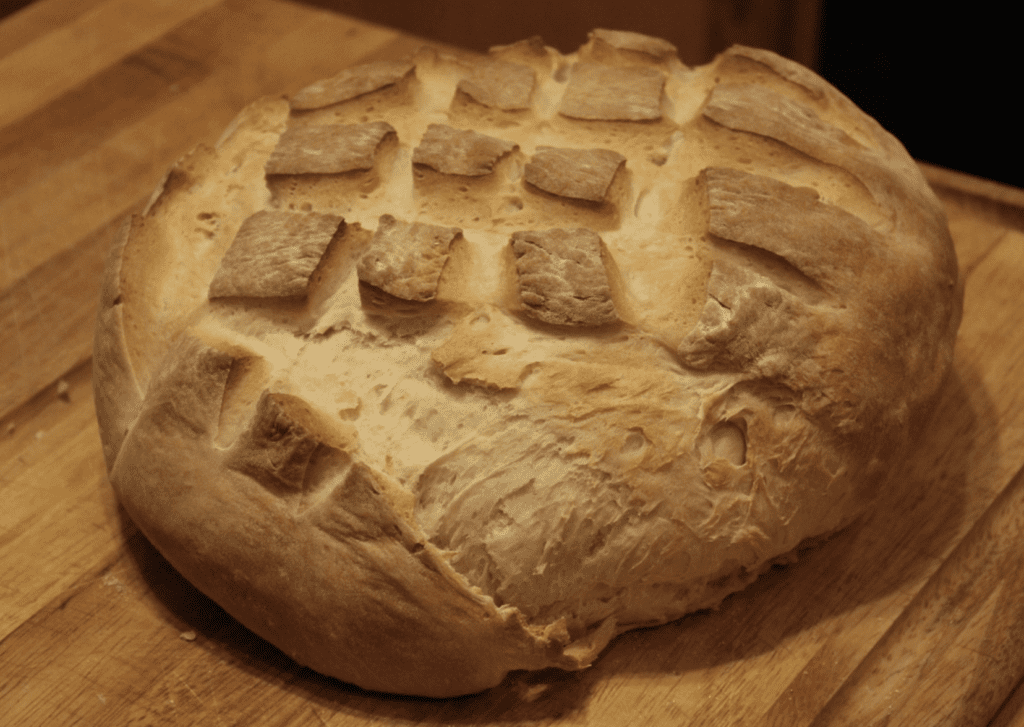 When you get to baking the bread, it needs a lot of oven spring in order for it to rise. In order to attain this, you should properly preheat your oven and your baking stone.

Turn your oven up to 500 degrees Fahrenheit and let it preheat with the pizza stone in it for the amount of time that the thickness of the stone requires.

After preheating, use the method above to place your sourdough bread inside the oven. Some cover the bread with foil but it is not recommended.

After 20 minutes of baking, your sourdough should still look like a pale sough, slightly wet and soft. Use a brush or a spray to moist the walls of your oven.

If you do not want to open your oven while the sourdough is cooking then you can opt for another strategy.

You can bake your sourdough on a slightly higher rack while putting a plate with a little bit of water on the bottom to create steam.

The steam will allow the sourdough to rise and have a crispy crust with the inside cooked perfectly.

Cook for several minutes (approximately 20 minutes) or until the dough has cooked into a beautiful golden brown color.

Take your sourdough bread out of the oven and let it rest before cutting into it. Let the steam go out of the bread and slice it after it has completely cooled down.

The pizza stone should have made the sourdough bread rise because of the heat that it has retained and transferred into the bread.

Cooking on the pizza stone eases the procedure and the stone makes up for the shortage om=f most ovens by directly transferring heat onto the crust of the bread.

Benefits of Cooking On A Pizza Stone

The direct contact of the stone to the bread allows it to give off the crispy crust that everybody loves that a heated oven air cannot supply.

It gives the dough the powerful start to keep rising without burning the surface and cooking the interior of the bread slowly upwards as it meets with the heat from the oven.

Another thing is that the porous nature of the pizza stone allows all moisture to sink into the stone thus creating the crispy crust.

It also transforms the moisture that it has absorbed into steam which makes the top crust of bread very light yet crunchy.

Then there is the benefit of keeping a stone in an oven. If you store your pizza stone inside the oven it makes the heat distribution a little bit more even.

Putting a pizza stone in a cold oven before preheating prevents the oven from producing hot or cold spots with the help of the radiation from the heated stone.

Baking bread on a pizza stone is a very great way to achieve a well-risen bread and a crispy crust. The stone heats up pretty quickly and helps the oven cook the bread properly.

Baking bread requires powerful heat that sometimes an oven cannot give that. Well, the pizza stone is there to the rescue for you and your bread.

See, pizza stones are not only for pizza as they can sometimes cook better results against the usual tools and cookware used to cook a specific recipe.

Pizza stones are a very great addition to your kitchen and yes, you should definitely get one. You can even use them for baking pizzas and other dishes so it is going to be a great investment for someone who loves to try different recipes in their ovens.

Do try baking bread on a pizza stone and let us know more about your experiences in the comments below!