Bakerstone has produced some amazing pizza kits in the past but when I Stumbled upon their portable gas pizza oven, I was extremely excited as to what it had to offer. In  this review we would discuss  the Bakerstone Portable Gas Pizza Oven in detail.

Since we are stuck at home, one of the fun things that we can do is to try and learn something new. Cooking is one of the most fun things to do as it can keep you occupied and satisfied.

Doing it at home gives you a lot of new opportunities to cook all the foods that you always want or crave for. It also allows you to edit the recipe that you find in ways that you like more.

There are things, of course, that you need to consider in order to get the best results. One of those is the cooking appliance that you use as it hugely affects how well your pizza will be.

Conventional ovens are good since they can cook pizzas. However, more often than not, they make the pizza crust soggy because of the lack of heat or heat that is not enough for the dough.

See, pizzas need to be cooked quickly and you cannot do that with a conventional oven. It will take at least 8 to 10 minutes before the pizza crust and toppings are cooked properly.

Without the instant and immense heat that the pizza needs, the pizza crust will more likely be soggy. That is why you have the option of buying pizza ovens such as the Bakerstone Pizza Oven.

Setting Up The Pizza Oven

The first thing that you should know about this pizza oven is that it has two major parts. First is the cooking chamber itself where you put the pizza in and then the grill bottom as a firebox.

The setup is pretty easy as the chamber itself fits right on top of the grill. You just need to connect the propane gas tank to the grill, turn it on, and then wait for the chamber to heat up. 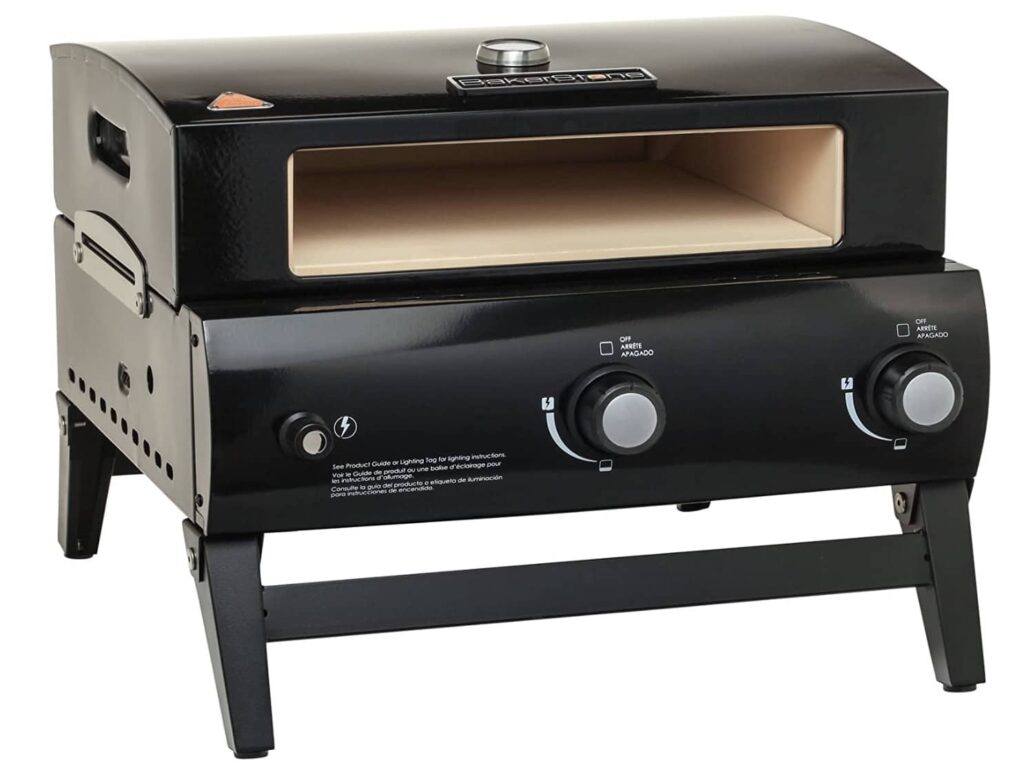 The weight of this pizza oven is around 30 pounds so while it is light enough to lift, you might need to set it up in an area where you would rarely move it as it is pretty heavy for long distances.

From there, you can start cooking your pizzas and control the temperature through the grill. This is a pretty easy pizza oven to use as it does not have any complicated controls included.

One thing that you should remember about the setup itself is that you need to put the pizza oven outdoors and away from any flammable materials or objects that can easily melt i.e. plastic.

You will also need a sturdy table that can support the weight of this pizza oven. A space for the gas tank, and of course a small table for you to prepare the pizza or the food on.

Now that you know how and where to properly set the pizza oven up, let us get into the features and parts starting with the cooking chamber. This is a removable feature of the pizza oven.

So basically, this cooking chamber is a stove or grill top pizza oven. That means that you can place it on any grill as long as the dimensions fit with the pizza oven itself.

This cooking chamber is where most of the weight of the pizza oven comes from. That is because it is made out of ceramics inside which is used as insulation for the entire interior.

The ceramics surround the entire chamber which means that it is able to distribute the heat evenly and retain it for a long time. This is extremely important due to the lack of doors.

Yes, this pizza oven chamber does not have any doors so a little gust of wind might change the temperature inside it. That is why it needs to be insulated to retain the heat inside it.

The exterior of the chamber is enclosed with a stainless steel shell. The shell does not directly press against the ceramics which makes it perfect for providing another layer of insulation.

That means that you do not have to worry about using this pizza oven chamber outdoors. The insulation will block most of the wind and excess moisture from getting in and messing with the temperature.

The top part of the chamber has a thermometer that pierces through the stainless steel shell. That way, it measures the actual temperature inside the chamber and not the shell.

The chamber has two handles on both sides so you can easily lift it up from the burner and transfer it to the grill. The space on the sides is wider so it heats up slower for handling it safely.

This is the second major part of the Bakerstone Portable Pizza Oven. It is basically a small grill with two burners that coil around the surface to ensure even distribution of heat.

This two-burner system of the grill consists of two coils. One wraps in a small square in the middle while the other provides heat to the outer parts by having an enlarged coil around it. 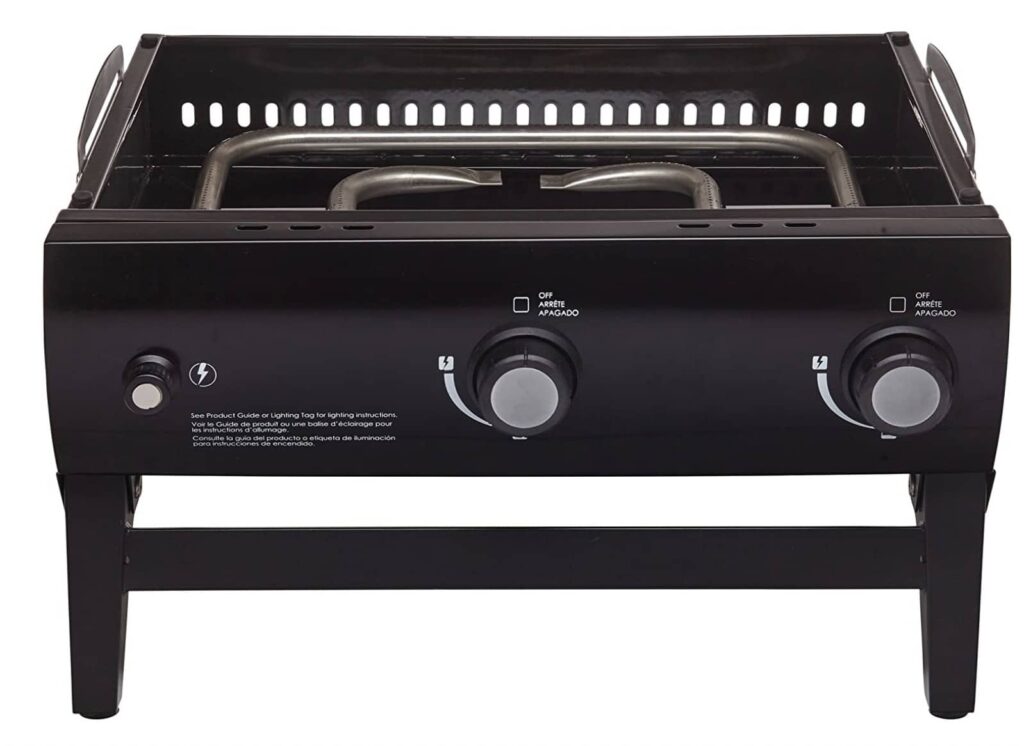 Each burner can be controlled individually with the dials on the front. The temperature that these burners can provide can get up to 800 degrees Fahrenheit for cooking pizzas.

The small cooking chamber is surely provided with enough heat as the burners have a total of 25,000 BTUs. Within 2 minutes, your pizza will be cooked with a crispy crust and perfect toppings.

All sides of the grill have holes that are used for ventilation. The structure inside this burner has a sloping platform underneath that guides grease to a pan.

That way, you can clean the grill easily. With its foldable legs, this burner system can be stored in small spaces in case you use the cooking chamber with other grills when cooking pizzas.

Performance (Cooking In The Pizza Oven)

One thing that I did not like about the burner of this pizza oven is the lack of a gas hose. It did include its own regulator but I needed to find the right gas hose for the pizza oven.

Aside from that, the burner system did a great job of cooking the pizzas. It did take a little bit of time to heat up the cooking chamber but that was not an issue since it did it in just 20 minutes.

The burner system also uses only 20-pound propane gas tanks which are also sold separately. From there, the controls did not take too much time to learn as you only need to turn the dials.

It also took a lot of time before the shell heated up so you can safely cook in it and hold the shell without burning your hands. The pizzas came out perfectly with crispy crusts and toppings.

The amazing insulation came to play when I used it during a relatively windy day. The ceramics were able to keep most of the heat inside but it did have trouble heating up on the front.

I just adjusted the pizza by rotating it every 20 seconds to cook all sides. Once the chamber heated properly, it did not affect the temperature too much as it was able to retain the heat.

The combination of enough heat and the baking stone was great for making the pizza crispy. The crust was browned perfectly and the cheese melted over the toppings to prevent burning. 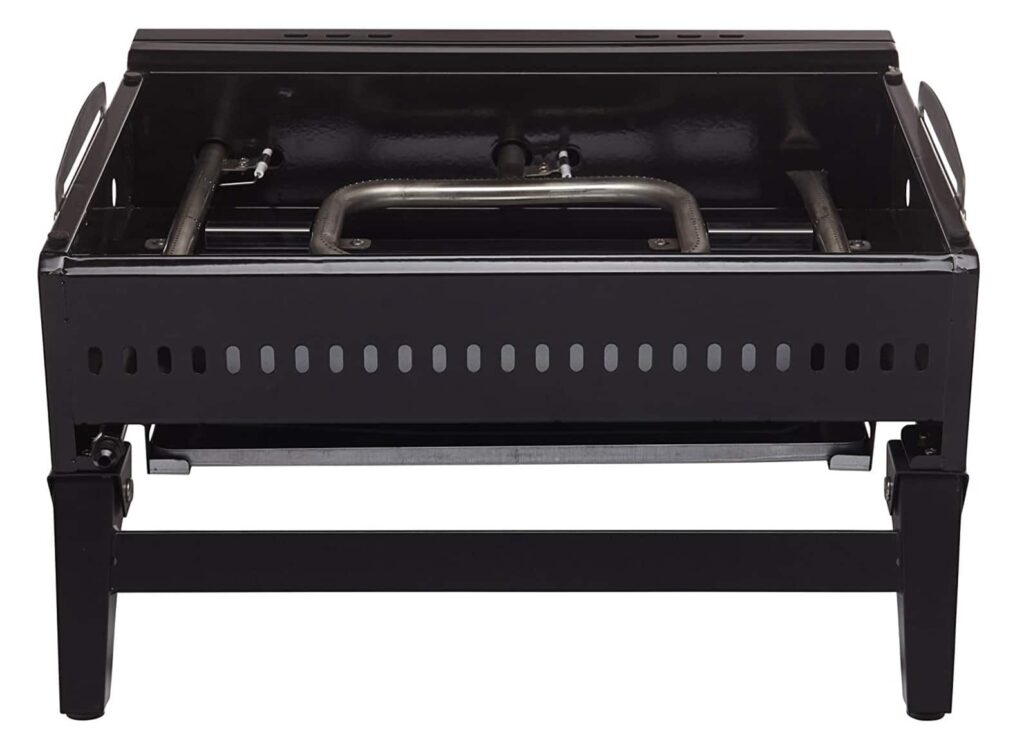 Despite having two main parts and a slightly complicated system of burners, this pizza oven was one of the easiest pizza ovens to clean that I have ever had because of its separate parts.

You can easily remove the cooking chamber to get access to the grill and burners. From there, I was able to remove the grease pan and easily dispose of the grease from other recipes.

The burners did not need much cleaning and the sides were easily cleaned by wiping them with paper towels. The same goes for the shell of the cooking chamber as it is made with smooth steel.

As for the interior of the cooking chamber, I suggest that you clean it with a soft-bristled brush only. Do not apply any liquid cleaning material to it, not even water, to prevent breakage.

The only way to clean the ceramics of the pizza oven is to dry clean it. So get a brush and then take away the food residuals, and finish it by wiping the surface or interior with a paper towel.

Do not scrub the ceramics with a steel-bristle brush or else, you are going to scratch the surface and remove its non-stick coating. The coloration is not an issue as it is actually beneficial.

The colored baking stone is a sign that it has garnered enough oil to burn. When it does that, the oil flattens the stone and creates a non-stick coating for the baking stone.

You can use them to grill or sear any food that you want over the burners. With the removable pizza oven, you can easily replace it with the dedicated grill grates and cook barbecue or steak.

You can also buy half griddles or half grill grates that fit perfectly on the grill. That way, you can even expand the functionality of the grill by cooking different types of foods at the same time.

Pizza ovens are great for making authentic pizzas with crispy crusts. That is their main task but then, they can also be used in other recipes to eat other recipes along with your pizzas.

The Bakerstone Portable Gas Pizza Oven is the perfect pizza oven for that. It can be used as both a pizza oven and as a grill to diversify the food that you are able to cook in it.

So if you want a versatile pizza oven that you can also use in other grills, then you should definitely get this pizza oven. You will be perfecting the pizza that you love in just a few practices!